For us Pisa (pics) was a day trip from Florence.  A one hour train ride brought us to the Pisa central train station leaving us a nice 20 minute walk to Piazza dei Mericoli, home to the Tower of Pisa. 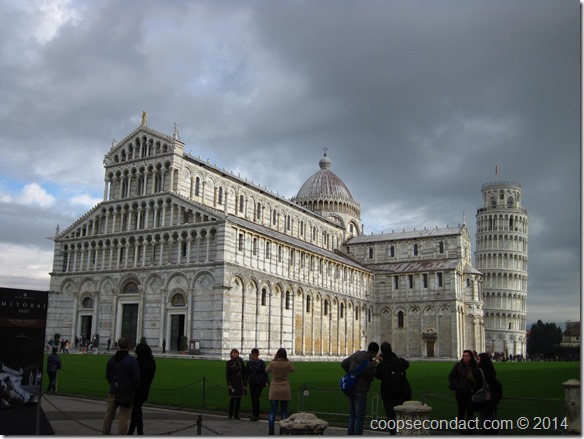 The tower was built as the campanile or bell tower for Pisa’s cathedral.  Construction of the cathedral was begun in 1064 using alternating bands of green and cream marble.  It was the largest cathedral in Europe when it was constructed and is supported inside by 68 very grand granite columns. 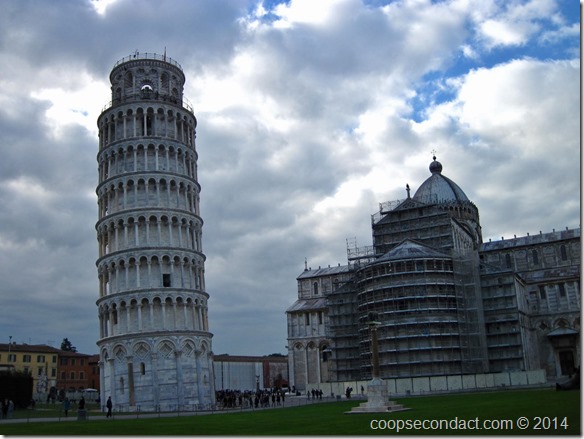 The tower construction was begun in 1173 but stopped about 10 years later when the completed first three tiers began to tilt.  When efforts to correct the lean failed they tried to build straight up from the tilted lower portion, giving a slight banana shape to the tower.  As the tower continued to lean, by 1993 it had reached 5.5% from vertical, almost 15 feet.  The most recent stabilization efforts have brought it back to 5% and to a point that they believe is sustainable…for now.  I wonder when they first began to realize that the lean was a good thing as it relates to tourism?

Pisa is a lovely town and well deserves some attention aside from its compromised campanile.