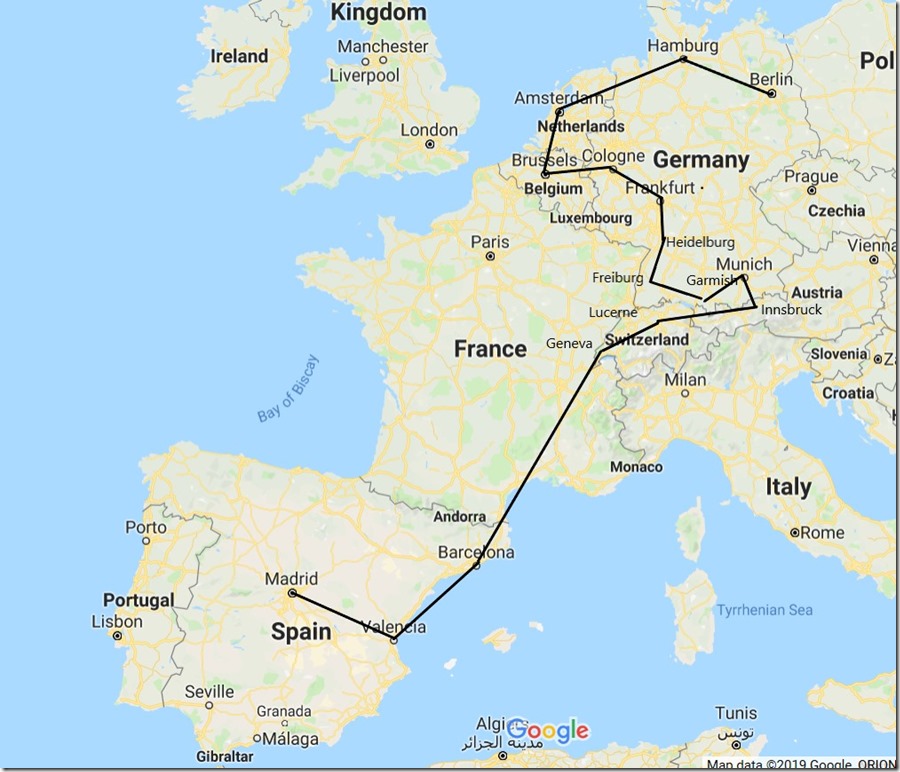 We just completed a trip to Europe where we spent 77 nights in 16 different locations and we used trains as our primary means of travel.  We rented a car for 9 days in Germany and took a flight from Barcelona to Geneva.  Otherwise, we used trains to get from place to place.  The trains were fast and reliable. END_OF_DOCUMENT_TOKEN_TO_BE_REPLACED

Once again, we began our visit to Barcelona with a walking tour.  We were told that Romans founded the city in 38 B.C.  In the first 200 years they built a walled city that defined the boundaries of Barcelona for the next 1600 years!  During this time they had to build higher since they could not build out, given that they could not extend the city beyond the walls.  Not until the mid-1850’s did they break out of their medieval walls.  People were dying very young from disease caused by the overcrowding.  Previously unknown engineer Ildefons Cerda created a plan for the expanded city that turned out to be extraordinarily visionary ultimately leading to him being credited as having defined “urbanization”.

Barcelona is part of Catalonia, an “autonomous community” in the northeast corner of Spain.  It is also referred to as a nationality for the people in this region who for centuries have been agitating for the creation of an independent state for Catalonia.  Before the 18th century it was a principality of the Crown of Aragon with its own language.  Today, Catalan, along with Spanish is the official language of this region.

END_OF_DOCUMENT_TOKEN_TO_BE_REPLACED

From Madrid we took a train southeast to the Mediterranean coast and the city of Valencia, Spain’s 3rd largest city.  The city was founded in 138 BC by Roman soldiers looking for a place for rest and relaxation.  During the 15th and 16th centuries, Valencia was one of the Mediterranean’s strongest trading centers.

END_OF_DOCUMENT_TOKEN_TO_BE_REPLACED

The city of Madrid has survived centuries of religious and political turmoil to emerge as a world class destination with beautiful architecture and art.  The Inquisition, Communist rule, a civil war and more recently, a deadly terrorist bombing in 2004, are all part of Madrid’s past.  Today, world class museums, beautiful parks and some of Europe’s most attractive plazas form a very appealing experience.  Clearly the world has noticed.  We were shocked by the volume of tourists pouring through the streets.