Laguna Quilotoa is a water filled volcanic crater located in the backcountry of the Cotopaxi province of Ecuador.  To get to it, you must travel all or some portion of the Quitoloa Loop, a ring of small towns and villages populated mostly by Ecuador’s indigenous people with their centuries old way of life.  Bus travel is infrequent in many portions of the loop so it takes some planning to get around.  We began by traveling from Banos to Latacunga, which is sort of a gateway to the Quilotoa Loop.  We spent one night at Hostel Tiana in Latacunga and then put what we would need to take with us in our backpack and stored our luggage at the hostel. 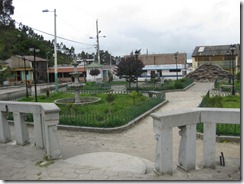 On Saturday morning, March 5, 2011, we caught a bus out of Latacunga headed to the village of Chugchilan via the town of Sigchos.  The bus left Latacunga at 11:30am and arrived in Chugchilan at about 3:00pm.  We stayed at the Cloud Forest Hostel in Chugchilan which is listed in the guidebook with a population of 100.  It sits at 3,200 meters above sea level (10,500 feet) and is often used as a jumping off point for visiting the crater.

Sunday has more bus service in this area than for other days of the week so we were told that we would be able to catch a bus at 9:00am that would take us to the Quilotoa crater.  There were several people from the Cloud Forest Hostel going that way.  The bus arrived at about 9:30am and we all got on for the ride.  The 22km road to Quilotoa is a hair raising ride with breath taking scenery.  The road is dirt and narrow and nearly washed away in many places.  Since we got a late start we arrived in Quilotoa a little later than expected at just before 11:00am.  We had been told to try to get there before 11:00am or 11:30am since the clouds tend to roll in at about that time and can obscure the crater.

After paying our entry fee of $2.00 each we made our way to the crater’s edge.  The rim of the crater sits at 3,914 meters above sea level (almost 13,000 feet).  We stepped to the edge and marveled at the sight in front of us.  The crater is 2 miles across and the surface of the water is about 800 feet down from the rim of the crater.  The crater was free of clouds at that moment but they were hugging the outer edges of the rim.  The blue/green water shimmered and drew a contrast against the dark, sheer rock face that rose up from the water.  (Note:  I borrowed the picture above from a site on the internet since we couldn’t obtain such a shot with our camera and vantage point.  All other photos are ours.)

Fog and Rain Roll In

You can see an area that looks almost like a beach at the water’s edge in the left foreground of the big photo above.  You can follow a path down to that point and then either hike back up or rent a ride on a horse.  We began to hike down and immediately the clouds and fog started rolling in to obscure the lake and it started to rain.  As the rain fell harder and harder and we could almost not quite make out the lake through the rain and fog, we realized that since our limited wardrobe for the trip to Chugchilan included only one pair of jeans each and that if they got wet we would be wearing wet jeans for the next 2 days.  Not a pleasant prospect.  So we reversed and hiked back up to the top and found a hot beverage and a snack.

We were told to catch a 1:00pm bus back from Quilotoa to Chugchilan.  So we went back

out to the road to wait.  Fortunately, the rain had stopped by this time but it was still foggy.  While we waited, an indigenous woman came along the road with a small boy and leading a burro which had a large bag tied on its back.  A short distance past us, she stopped, unloaded the bag from the burro onto the road and started leading the burro back up the road.  The little boy stayed with the bag.  A short time later, two little girls, maybe 6 and 2, walked down and joined the little boy.  Maybe 15 minutes later the mother rejoined them, sans burro and certainly they were waiting for a bus heading in the other direction.  Now there is very little traffic on this road so the children were in no danger but clearly this is how life works in the remote Andean countryside.

We were still waiting for our bus at 1:40 when a local man in a pickup truck pulled up and asked where we were going.  We told him Chugchilan and he said he would take us for $20.00.  We said that we were waiting for the bus and he said, no bus.  This is common for these men to provide a “shuttle” service to and from Quilotoa to fill in for the infrequent bus service.  I offered $15.00 and he said no, that it’s a long drive and that we would be in the cab with him, warm and dry.  So we agreed and got into the truck.  No more than 1/4 mile into our drive, he stopped for another couple on the side of the road and asked if they wanted a ride to Chugchilan.  They said yes and he said the cost is $5.00 each, they countered with $3.00 each and he accepted but they had to ride in the back which was covered but not enclosed.  I then tried to extract a discount since he now had additional income to cover his costs but he would have none of it.  I guess I’m not a very good negotiator.  Especially in Spanish.

On the road from Chugchilan to Sigchos

After another night at the Cloud Forest Hostal it was time to return to Latacunga.  Our choices were to catch a bus at 4:00am or wait for a milk truck (lechero) which usually makes the trip from Chugchilan to Sigchos at around 9:00am.  In either case, we would be dropped in Sigchos and wait to catch a bus at 2:30pm from Sigchos to Latacunga.  We opted for the milk truck.  At around 9:30am, we had not yet seen the lechero but a bus came up the road, backwards.  It backed up the hill into the village of Chugchilan.  We figured, well, if it’s heading to Sigchos it will have to come back past us and we could flag it down.  Just as it started back in our direction the milk truck came by heading into the village but since there was a bus there we took it.  No idea why it was there at that time, it’s not a scheduled service but it took us to Sigchos.  At that point we had about 4 hours to kill before the bus to Latacunga.  Nothing much to do except watch the kids throw water balloons at each other, a Carnival tradition.

Once back in Latacunga, we retrieved our luggage and spent another night at Hostel Tiana before heading on to Quito on Tuesday morning, March 8.