We’re in Cuenca now.  On Feburary 1, we made the trip from the Galapagos to Cuenca. We got up early in Puerto Ayora on Isla Santa Cruz in the Galapagos.  Took a taxi to the bus terminal and caught the 7:00am bus to the dock.  Then a short boat trip across the channel to Isla Baltra where the airport is located.  Hopped the bus from the other side to the airport, got checked in for the flight then had some breakfast.  Our flight from Galapagos landed in Guayaquil landed about 2:45pm (there’s a one hour time difference, Galapagos is in the Central time zone, Ecuador mainland is Eastern time.  We got a taxi from the airport to the bus terminal which is very near by but not suitable for walking.  We acquired a “helper” at the curb, who, for a small compensation took us to the bus company with the next bus leaving for Cuenca and he then escorted us to the correct departure point.  He thought I should have given him more but I stood firm on my tip.  The bus left at 4:00pm and we arrived in Cuenca at around 7:30pm, then a short taxi to our hotel.

We’re happy with our place in Cuenca.  It is a small suite, like a studio apartment, 2 double beds, a table and chairs and a small kitchen stocked with cookware, dishes and some utensils.  It’s also a good location right on the River Tomebamba and very near to the Mercado and the central part of colonial Cuenca.  There’s also a couple of nice bakeries near where we can get fresh bread in the mornings.  Our place is directly across the street to the right at the end of the path you see on the right in this photo.  We’re planning to stay here for 3 weeks so we wanted something comfortable.

We’re kind of glad to be back in the highlands with the 70 degree temps after almost a month of hotter and humid weather on the coast and in the Galapagos.  However, we are getting almost daily rain in Cuenca.  It’s also good to have a few days to get caught up on organizing our photos and updating the blog. 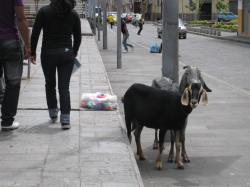 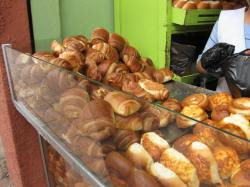 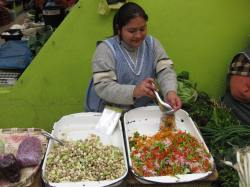 We went to see a movie recently at the local “multicine”.  We saw Social Network (“Red Social” is the Spanish title).  The Multicine is in a small two story modern shopping mall.  Most of the movies they show are US made movies with the English language soundtrack and Spanish subtitles so, except for the subtitles, it’s just like watching the movie in the US.  We went to an early evening showing and the full ticket price is $4.00 each for adults.  We also indulged in a large popcorn and two medium drinks (which were quite large) for $5.40.  They have more recent movies showing but this was one that we hadn’t seen and the one we were most interested in seeing.

For now, we’ve started some more Spanish lessons and are just enjoying Cuenca and will be exploring some of the nearby places of interest.  Namely, Ingapirca (Incan ruins) and Parque Cajas (a very large national park in the mountains to the northwest of Cuenca).  Cuenca is a very walkable city with many pleasant plazas and parks.

I had to add a quick update to this article.  We were able to watch the Superbowl.  We had checked out nearby bars that would be showing the game, but then we realized that the cable we had on the TV in our room included Fox Sports.  Now this is Fox Sports for South America which shows “futbol” all the time, but they carried the Superbowl.  Since it was raining on Sunday, we decided that it would be better to stay in and watch in our room.  So, a quick trip to the TIA (a mini-grocery store) to see what we could find for “party snacks”.  The best we could come up with was tuna which we mixed with mayo, onions and peppers and had with crackers and some Ruffles potato chips.  Now the broadcast announcers were Spanish (how much do they really add the experience) but we saw the botched national anthem and the halftime light show.  It was a good time.