From Monticello, we moved a little further south to Bluff, UT.  There we parked at the Coral Sands RV Park.

END_OF_DOCUMENT_TOKEN_TO_BE_REPLACED

From Lusk, we moved west to Glenrock, on the North Platte River, about 20 miles east of Casper, WY.  In Glenrock we parked at the Platte River Campground.

We checked out the Ayres Natural Bridge located a little east of Glenrock.  This rock bridge is 20 feet high with a span of 90 feet.  Since it is near the Oregon Trail, it is considered one of Wyoming’s first tourist attractions because it was often visited by emigrants traveling west.  In 1843, a pioneer described it as “a natural bridge of solid rock, over a rapid torrent, the arch being regular as tho’ shaped by art.”

On another day we headed west to Casper on the day they were holding a “5150 Festival”.  “5150” refers to the elevation of the city.  Apparently, they had quite a good party last year during the solar eclipse, being very much in the center of its path.  They were hoping for a repeat but in the absence of another eclipse they decided to go ahead with the festival anyway.

Capitol Reef National Park (pics), located just east of Torrey, UT,  is 100 miles long but fairly narrow, running roughly north and south.  Most of the park has very limited accessibility.  The primary feature of the park is a long up-thrust called the Waterpocket Fold, about 75 miles long and 65 million years old.  It is a warp with older and newer layers of earth folded over each other in an S shape. 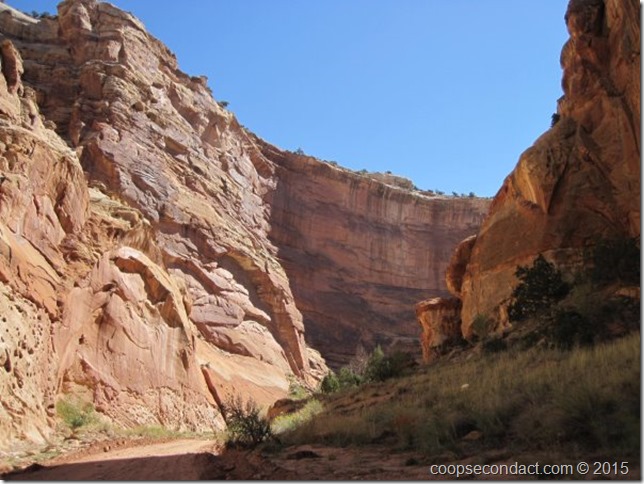