The crest for the city of Hamburg prominently features a castle which represents the Hammaburg that was built by order of Charlemagne around the year 808 AD.  Subsequently the castle was attacked and destroyed, by Vikings, then rebuilt no less than 8 times.  Hamburg really got a boost when, in 1189, Frederick I granted it the status of a Free Imperial City and tax free access into the North Sea.  This made the city a major port in Northern Europe.  In more recent times, they have discovered that in fact, Frederick I died before he could sign this actual document but they were successful in convincing others that he had done so. 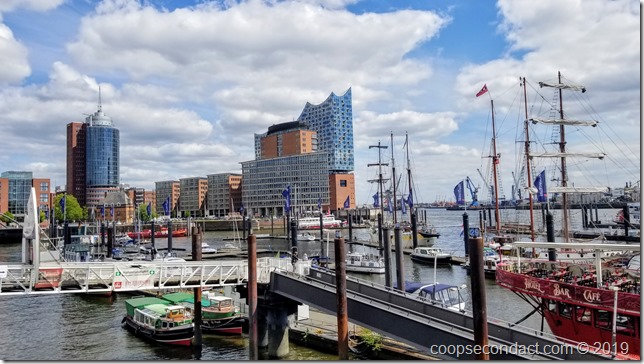 In any case, this free trade status also allowed Hamburg to become a part of the Hanseatic League which was a powerful trade union of Northern European and Baltic cities which ran for the next 300 years.  Hamburg is on the Elbe River and two of its tributaries, the Alster River and the Bille River.  Like Amsterdam, much of the land mass of Hamburg and its port have been recovered from the waters of the Elbe.  Water is very much a part of the city and supposedly, Hamburg has the most bridges of any city in the world, more than Venice, Amsterdam and London combined with almost 2,500.  This is, however disputed, since the US city of Pittsburgh claims this title, but Hamburg says that Pittsburgh will only give an estimate while Hamburg says they can document their count of 2,496 bridges. 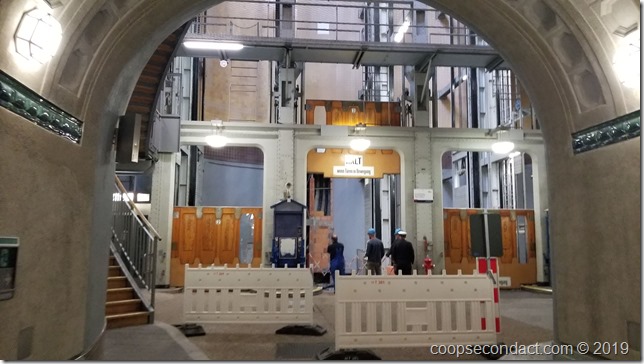 The Elbe Tunnel (or St. Pauli Elbe Tunnel) is a 1,396 foot tunnel that crosses underneath the Elbe River connecting central Hamburg with the docks and shipyards on the other side of the river.  In the mid-19th century, Hamburg was a busy harbor with thousands of workers that had to cross the river daily in order to get from the areas where they could afford housing.  They used rowboats, steamships and barges but capacity was limited and fog frequently interfered with their operation.  Also, to develop a ferry service would mean congestion for shipping traffic.  So the tunnel was built and opened in 1911 to carry pedestrians and vehicles using massive lifts on each end.  The tunnel suffered damage during WWII but it was repaired and with the reconstruction of Hamburg, by 1955 the tunnel carried 438,000 vehicles for the year.  It still operates today but with much lower volumes since harbor operations have been moved further upriver and bridges carry most of the vehicle traffic.

St Nikolai church in Hamburg was the tallest building in the world from 1874 to 1876.  It was mostly destroyed in World War II and the portion that remains has been left as a memorial.  During three days near the end of July 1943, the British and United States conducted a bombing campaign code named Operation Gomorrah.  The intensive bombing created a firestorm with hurricane force winds and temperatures of approximately 1,470 degrees F.  The city was 80% destroyed with 42,600 people killed and 37,000 wounded.  Many who were able to get to a bomb shelter were suffocated due to the vacuum created by the firestorm. 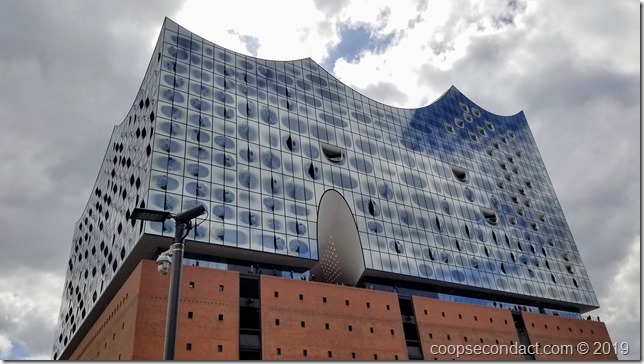 The Elbphilharmonie is a concert hall built atop an old warehouse building in the HafenCity quarter of Hamburg.  It is one of the largest and acoustically most advanced concert halls in the world.  It is commonly nicknamed Elphi.  It was inaugurated with concerts in January 2017.  During its construction it was greatly derided by many of the residents as a waste of money while the costs soared to almost 4 times the original estimate.  But Hamburg has seen a boost in tourism in many cases driven by people who want to attend a concert in the new hall or are simply interesting in seeing the building which resembles a water wave, hoisted sail or iceberg.  You can get a free ticket to stroll around the viewing platform for a terrific view of Hamburg and its harbor.