The official founding of Brussels is usually considered to be 979.  The town grew rapidly and extended towards the upper town (higher ground) where there is a smaller risk of floods.  In 1225 work began on the Cathedral of St. Michael and St. Gudula.  The Grand Place was where Brussels traditionally conducted its business.  In 1407, they began construction of the City Hall at this location and eventually, the square was filled with a variety of Guild Halls representing all of the trades. 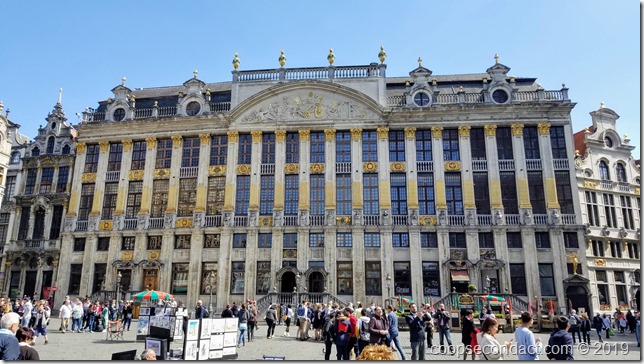 In 1695, during the Nine Years’ War, French King Louis XIV sent troops to bombard Brussels with artillery.  Together with the resulting fire, it was the most destructive event in the entire history of Brussels.  Most of the Grand Place was destroyed (with the exception of the City Hall) along with 4,000 buildings.  The Guild Halls were all rebuilt within five years, an impressive accomplishment.

Today, Brussels’ Grand Place is generally recognized as perhaps the most beautiful plaza in Europe, which of course is a tall order.  The centerpiece is the gothic town hall, built in the first half of the 15th century.  It’s tall spire is a landmark you can view from almost anywhere within the city.  As you look closely, you can see that it is not symmetrical in may ways.  The spire and main entrance are not centered and the right portion has many differences from the left half.

There are 3 first languages spoken in Belgium:  German, French and Dutch.  German is a very small portion and only along the eastern border with Germany.  In the northern part of the country, referred to as Flanders, only Dutch is spoken and French in the south.  In the city of Brussels, at one time, only French was spoken but there was a Dutch speaking population that spent years struggling to be “heard”.  Today, French and Dutch are both official languages in Brussels.

Perhaps the most well known symbol of Brussels is Manneken Pis, a small statue of a boy urinating into a fountain basin.  Frequently the boy is dressed in different outfits that relate to a holiday, event or some whim.  Reportedly, he has a wardrobe of more than 1,000 outfits.  The statue seems to have originated in the mid-1400’s and the people of Brussels say that it embodies their sense of humor.  Everyone has their own favorite story as to the inspiration for the statue but no one knows for sure.  You can find all kinds of souvenirs and other uses of the image all over Brussels.  There is also a female imitator statue called Jeanneke Pis and a dog named Het Zinneke.

Many would consider Belgium to be beer paradise.  Now I would say that the US is developing into a beer paradise but the Belgians have been brewing up their interesting beer varieties for much longer.  Sure you have the pilsners and lagers, but you will find brews called Forbidden Fruit, Judas, Duvel (Devil) or be named for an abbey, where beer was first brewed here in the 11th century.  Almost all abbey beers are available in at least two styles, Bruin/Dubbel/Double beers are usually dark, Blonde/Tripel/Triple usually golden.  Six Belgian abbeys still brew within the monastery walls, and these rich, smooth and complex “Trappist” beers are considered the epitome of the Belgian beer experience.  And then there are the glasses from which you drink Belgian beers:  each style of beer has a particular shaped glass.

When the Brussels Palais du Justice was completed in 1883, it was considered to be the one of the largest buildings in the world.  It was built during the reign of Leopold I by Royal decree.  The Palace of Justice is bigger than St. Peter’s Basilica in Rome with a dome weighing 24,000 tons.  The main entry hall is astonishing in its dimensions and grandeur.  The building contains 27 large courtrooms and 245 smaller courtrooms and other rooms.

The Royal Palace of Brussels is the official palace of the King and Queen of the Belgians, however, it is not used as a royal residence.  The façade we see today was only built after 1900 at the initiative of King Leopold II.  The grounds on which the palace stands were once part of the Coudenberg Palace, a very old palatial complex that dates back to the Middle Ages.  Leopold II determined that the palace was too modest for a king of his stature and during his reign the palace nearly doubled in surface.

Brussels is sometimes referred to as the Capital of Europe because of the many institutions of the European Union that are located within the city.  They are primarily grouped in an area in the eastern part of town known as the European Quarter.  I’m not going to attempt to lay out the details of the various administrative groups for the 28 member countries of the EU (mostly because I don’t know that much about them) but there are 3 primary units:  European Commission, Council of Ministers and European Parliament.  These are all located in Brussels.  (The Court of Justice is in Luxembourg and the European Central Bank is in Frankfurt, Germany.)  There are many thousands of people employed to support these institutions.

Parc du Cinquantenaire (Park of the Fiftieth Anniversary) is a large public park in the easternmost part of the European Quarter of Brussels.  As implied by the name, the park (along with most of the U-shaped buildings that dominate it) was commissioned under the patronage of King Leopold II to commemorating the 50th anniversary of Belgian independence.  The triumphal arch was planned to be part of the construction for the national exhibition of 1880.  However, time ran out and most of the arch was constructed of wood panels.  Completion of the arch became a battle between Leopold and the Belgian government and was finally completed in 1905 in time for Belgium’s 75th anniversary.

There are two food items that Belgium wants to you know about as originally Belgian:  fries and waffles.  That’s right, Belgium wants to you to know that they originated what we call French Fries and that we should be calling them Belgian Fries.  In Brussels, you can find “Frites” stands on just about every street.  We were told that the original recipe is to fry them in beef fat but most places don’t do that now.  We tried Belgian Frites and found them to be absolutely delish.  Nice crunch on the edges, soft and fluffy inside, not greasy.  The Belgian Liège waffles are made with a yeast dough and pearl sugar to create the caramelized crunchy outside.  Again, waffles with a variety of toppings are street food in Belgium.

Belgium has a dark history related to the African Congo.  In 1884-1885, the Berlin West Africa Conference effectively divided up the African continent among the Great Powers of Europe.  King Leopold II of Belgium was granted a “personal” concession for the Congo which he administered in a notoriously brutal manner, becoming fabulously wealthy in the process.  Rubber was extracted using slave labor and those put there to manage the process were unrestrained in their methods.  It is thought that under the king’s rule there were as many as 10 million Congolese deaths related to disease, famine and outright killing.  In 1908 the Congo was ceded to the control of the Belgian government, not its king.  This is an event that is little known or acknowledged, even by the people of Belgium, many of whom refuse to speak about it today.