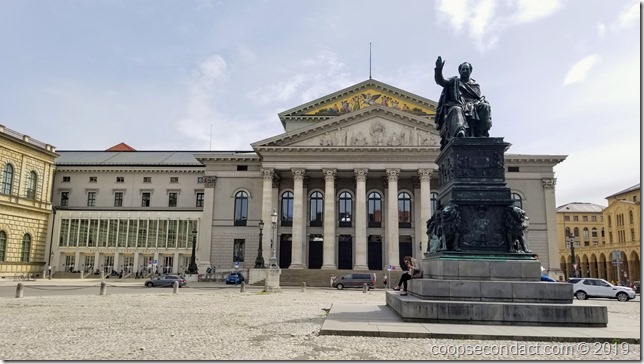 Munich traces its founding to the year 1158.  In 1240 the city would pass to the House of Wittelsbach which would govern Munich (and Bavaria) for the next 700 years.  Munich prospered as a salt trading center but would be hit hard by the plague in 1349 and it would persist for the next 150 years.  The coopers (barrel makers) initiated a ritualistic dance in an effort to bring an end to the plague since their trade was suffering because people were afraid to leave their houses and therefore were not drinking as much beer.  This dance continues to be performed every seven years but it is reenacted 3 times daily by the little figures in the Glockenspiel high up on the main tower of the city hall.

Munich has seen many turbulent times, but the 20th century was particularly challenging.  WWI practically starved the city, while the Nazis first rose to prominence here and WWII nearly wiped Munich off the map.  Most of the city’s historic buildings had to be rebuilt after allied bombing reduced them to rubble.  Some were reconstructed to match the original while others are an approximation. 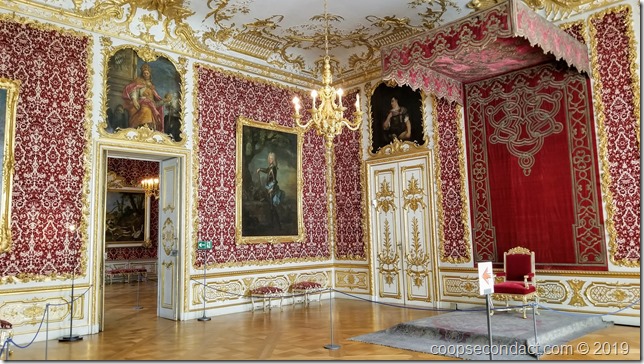 The Munich Residenz is a grand palace that reflects the splendor and power of the Wittelsbach clan, the Bavarian rulers who ruled from and lived here from 1508 until WWI.  The amazing treasures, as well as all the trappings of their lifestyles over the centuries are on display at the Residenzmuseum, which takes up around half of the palace.  After suffering extensive damage from the bombing during WWII many of the most magnificent rooms were lovingly restored.

The Antiquarium is a barrel-vaulted hall smothered in frescoes and built to house the Wittelsbach’s extensive antique collection.  Upstairs are the Rich Rooms with exuberant rococo carried out by the top stucco and fresco artists of the day.  Further along are the Stone Rooms, the emperor’s quarters, awash in intricately patterned and colored marble, except it’s not marble.  They used Scagliola which is an Italian artisan process using stucco that is made to look like marble.  The wealth of the Wittelsbachs allowed them to draw upon the finest painters, furniture makers, weavers and other artisans from around the world.

Munich’s farmer’s market was originally conducted in Marienplatz, the main central plaza.  When it outgrew this space, it was moved a short distance to the southeast to a place that eventually became known as Viktualienmarkt.  Over the years it has evolved into an extensive market for fresh food and exotic ingredients that are not available elsewhere in the city.  It now has around 140 stalls and shops offering flowers and plants, fruits and vegetables, venison and fowl, eggs, butter, honey, fish, meat, sausages, herbs, spices, delicatessens, wine and tea assembled in an area covering 22,000 square meters.  When you’re ready for lunch or just a snack, there are plenty of ready to eat items to choose from.  Once you have made your selections you can head to the huge beer garden at the center of the market.

Speaking of beer gardens, it’s one of the most appealing features of Munich.  Back when breweries kept their barrels underground in order to keep them cool, they decided to put a few picnic tables above ground to serve their drinks.  They traditionally planted chestnut trees to provide some shade.  Over the years there were challenges from the restaurant owners but ultimately, the beer gardens thrived and to this day you can bring your own food to any beer garden and enjoy a nice picnic with a fresh lager or weissbier.  There are beer gardens in the city that can accommodate up to 8,000 patrons.

When it comes to beer halls, arguably the Hofbräuhaus in Munich is the most famous in the world.  The brewery was founded in 1589 by the Duke of Bavaria, Wilhelm V.  Early in the 17th century Wilhelm’s son turned the brewery’s focus to wheat beer and its popularity led him to declare that only Hofbräuhaus could brew this weissbier.  Hofbräuhaus in Munich can accommodate up to 5,000 patrons in its various halls and its beer garden.  It has become a must see for tourists from around the world.

The Englische Garten (English Garden) in Munich is one of the largest urban parks in the world, on the scale of Central Park in New York City.  It was founded in 1789 and has undergone changes and expansion over the years since.  Near the center of the park is a…wait for it…beer garden which will seat 7,000 people.  In addition to beer, they serve a full range of German favorites, sausages, pig knuckles, sauerkraut and radishes.  Also in the park is an area called Schönfeldwiese (“Beautiful field meadow”).  In this part of the Gardens nude sunbathing has been permitted since the 1960s, something which many Germans practice.  Since we were there on a nice sunny and warm day, we can confirm this practice.  There is also an artificial stream running through the park that creates a standing wave.  Surfers line up along the banks taking turns entering the water with their boards.

You can’t talk about Munich without mentioning Oktoberfest which is an annual outdoor fair that originally began in 1810 to commemorate the marriage of Prince Ludwig and Princess Therese.  The event took place in the front of the city gates on Theresienwiese baptized fields, which translates to Theresa’s Fields.  In 2010, my friend Steve invited me to attend Oktoberfest with him and my eyes were opened to what a great event it is.

When planning for our current trip, I discovered that Munich also has something called Frühlingsfest, AKA Springfest.  The easiest way to describe Springfest is that it is a mini-version of Oktoberfest held in the Spring.  And wouldn’t you know, we were planning to be passing through Munich right around the time of Springfest.  Well, this calls for an itinerary modification.  Springfest has been going on since 1965 and this year it began on April 26 and continued through May 12.

We attended the opening day festivities which began at about 2:30pm.  Sadly, although we had experienced perfect weather up to this day, we had rain showers during this time.  There were 5 highly decorated beer wagons and 2 beer tent bands performing.  Five of Munich’s breweries were on hand to pass out a mug of free beer.  They had a certain number of commemorative mugs but we were a bit too far back in the line to get one of those but we did get a liter of beer for our efforts.  The beer wagons and bands then led a short parade onto the festival grounds. 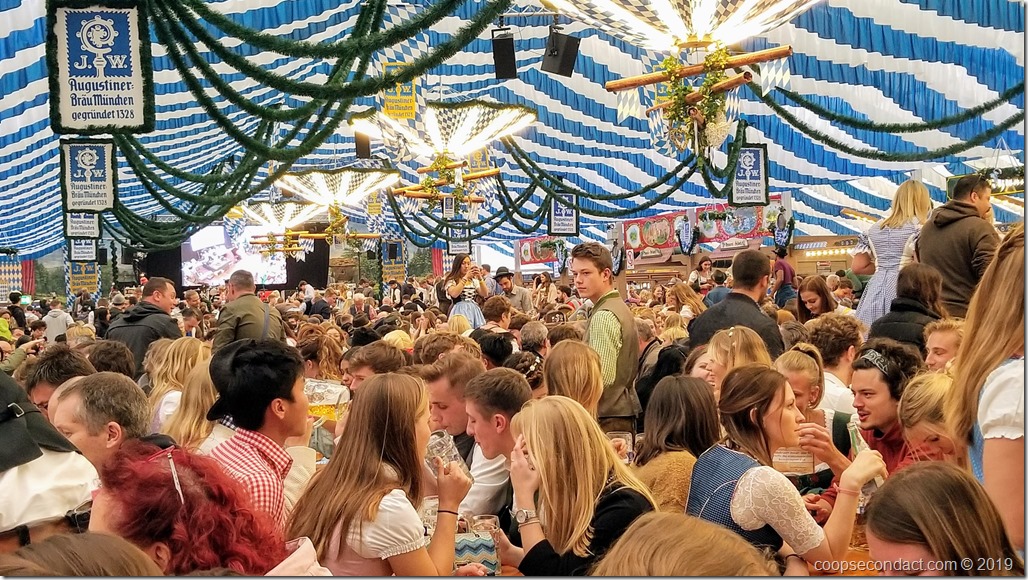 There are 2 large beer tents for Frühlingsfest (many more for Oktoberfest) and we selected the Augustiner tent.  We staked out a seat at one of the tables and once things got underway, we enjoyed some beer, some food and the festive atmosphere, the band playing and people up on the benches singing and toasting.  We sat alongside 5 young Germans, one of which lives in Munich, with friends from college who came to Munich for Springfest.  Lots of fun.

On Sunday in Munich most of the major museums reduce their entry fee to 1 Euro per person.  We chose to visit the Modern Art Museum (Pinakothek der Moderne).  The museum has 4 sections: paintings, photographs and drawings, architecture and design.  We found appealing paintings by the German expressionist Ernst Ludwig Kirchner plus others from Wassily Kandinsky, Paul Klee and Pablo Picasso.  We had also wanted to visit the Neue Pinakothek, one of the most important museums of 19th century art in the world, but it is currently closed for renovation.