Innsbruck sits in a valley with mountains to its north and south and the Inn River running through it.  Just on the other side of those mountains is Germany to the north and Italy to the south.  With relatively accessible mountain passes in both directions and a bridge across the Inn River (thus the name “Innsbruck”), this town became a very important trade route.  Innsbruck is the capital of the Austrian Federal State of Tirol (or Tyrol).  This region was much larger but the area of South Tirol was ceded to Italy at the conclusion of World War I.

The Golden Roof residence in Innsbruck symbolizes the rule of Maximilian I who, along with his father ruled as the Holy Roman Emperor during the late 15th and early 16th centuries.  He expanded the Hapsburg empire into Spain, The Netherlands and parts of Gemany and Italy.  The Golden Roof tops a balcony from which Maximilian I could oversee festivities celebrating his assumption of rule over Tirol.  The shingles of the roof are covered with a thin layer of gold.

In 1500, Emperor Maximilian I completed the construction of the nearby Imperial Palace.  Almost 250 years later, Maria Theresa, the only female ruler of the Hapsburg empire and the last of the House of Hapsburg, visited the palace and determined that it was behind the times.  Maria Theresa arranged for the palace to be rebuilt in the Viennese late Baroque style.  These renovations were completed in the 1770’s although there had been no Tyrolean princes since 1665 and the palace was largely unoccupied afterwards.  The centerpiece of the palace is the “Giants Hall”, a large banquet hall with full length portraits of Maria Theresa and her family and huge ceiling frescoes painted around 1770.  We toured the Imperial Palace but were not allowed to take photographs. 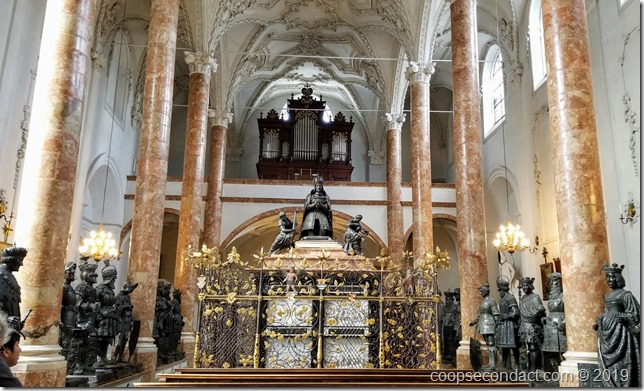 On his deathbed, Maximilian I expressed his wish to be entombed at the St. George’s chapel in the Castle Wiener Neustadt.  This wish was fulfilled, but the 40 bronze statues which were commissioned for his gravesite turned out to be too heavy for this place.  For this reason his grandchild, the emperor Ferdinand I, had a separate church with an empty grave (cenotaph) established.   However, only 28 of these larger than life statues were completed and they now stand alongside the beautiful cenotaph in the Court Church adjacent to the Imperial Palace in Innsbruck.

Innsbruck’s Triumphfal Arch was built in 1765 by Empress Maria Theresa, originally to commemorate the marriage of her son, the Duke of Tuscany.  The design was meant to evoke the aesthetic of the mighty Roman Empire.  It was named Triumphpforte upon its completion and it sits at one end of the grand street named for the Empress, Maria-Theresien-Strasse.

The Nordkettenbahn is a series of cable cars and gondolas that lift you from the city of Innsbruck to the peak of the nearby Nordkette mountain range.  You begin at the funicular station alongside the Inn River in Innsbruck.  This takes you across the river and up to the village of Hungerburg at 2,800 feet elevation.  From here you change to a gondola that rises dramatically to Seegrube at 6,250 feet elevation.  Here there are a number of ski runs available.  The next leg of the gondola takes you to the Hafelekar peak at 7,400 feet.  If you have the intestinal fortitude, there are very steep ski runs from this point or you can  make the climb up an additional 150 feet to the peak which gives you a 360 degree view.  We had a blue sky weather day which gave us stunning views. 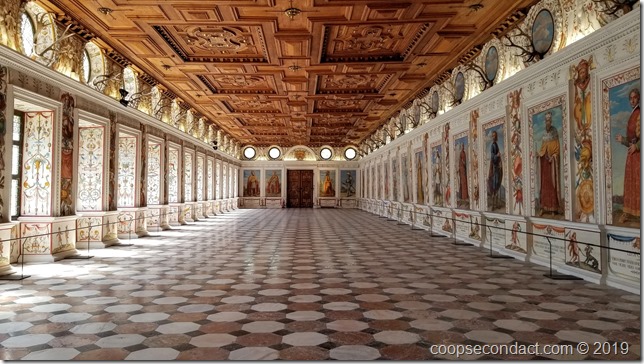 The Ambras Castle (Schloss Ambras) is a Renaissance castle constructed in the 16th century that is closely associated with Archduke Ferdinand II who was one of history’s most prominent collectors of art.  The collections, still in the Lower Castle built specifically for that museum purpose, make Castle Ambras Innsbruck the oldest museum in the world.  Above the Lower Castle is the famous Spanish Hall, a notable example of German Renaissance architecture, which contains an intricate wood-inlay ceiling and walls adorned with 27 full-length portraits of the rulers of Tyrol.  The Upper Castle contains the extensive Hapsburg Portrait gallery featuring paintings of numerous members of the House of Austria and other leading ruling European dynasties, including, as a remarkable feature, many portraits of princely children.

Innsbruck was the host for the Winter Olympic games in 1964 and 1976.  The Bergisel Ski Jump was a venue for those two events as well as countless international events including the annual Four Mountains Ski Jump Tournament.  The Bergisel has been in use since 1927 but the current tower was completed in 2002.  A funicular takes you to the base of the tower from which you can ride the elevator to a viewing platform and to the ramp where the jumpers launch themselves.

The Innsbruck City Tower (Stadtturm) was completed in 1450.  Around the clock, tower guards kept watch over the city, announcing the hours of the day, warning the citizens about fire or other dangers.  The guards could also get an early look at those traveling through Innsbruck to see if they looked familiar or could pose some threat.  The tower watch program continued until 1967.  The tower was outfitted with a clock in 1603.  A spiral stairway with 148 steps leads to a viewing platform giving terrific views across the rooftops of Innsbruck and the mountains beyond.

Since 1895, Swarovski has been crafting beautiful sparkly things from glass crystals.  The company was founded by Daniel Swarovski in the village of Wattens about 20 kilometers from Innsbruck.  Today you can visit Swarovski Crystal Worlds to see the 16 chambers of wonder and the Crystal Cloud floating above a mirror lake.  The clouds are covered in 800,000 hand mounted Swarovski crystals.  In the Swarovski shop you will find art pieces and a magical selection of crystal creations.  (Yes, we did make a small purchase here.)