Heading south from Montrose, the most direct route to reach Durango is US Highway 550.  The road is a part of what is called the “San Juan Skyway”, as it travels through the San Juan Mountain range of southwestern Colorado.  In particular, the portion of this highway between Ouray and Silverton is known as the “Million Dollar Highway”.  This road is hung on the face of the mountain and has narrow lanes, no shoulders, no guardrail and steep drops as you can see in the above photo.  A little dicey in a motorhome towing a car.  The origin of the name is in dispute.  Some of the possible explanations:  it cost one million dollars per mile to build; the fill dirt contains a million dollars in gold ore; or, I wouldn’t drive that road again for a million dollars. 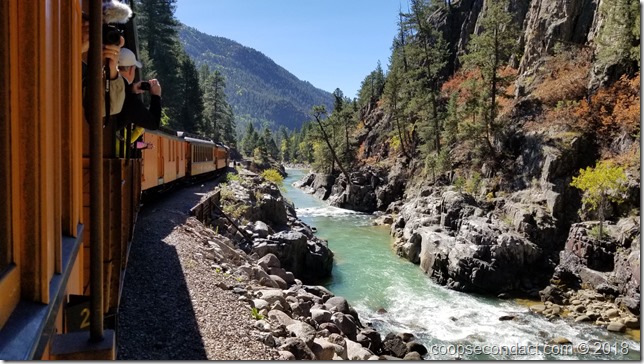 Durango is home to the Durango and Silverton Narrow Gauge Railroad (D&SNG).  This has become a VERY big draw for tourists in this part of Colorado.  The coal powered steam locomotive hauls passengers from Durango, along the banks of the Animas River, north to Silverton.  The passengers then have about 1 and 1/2 hours to visit Silverton before boarding the train for the return to Durango.  The total round trip takes about 8 or 9 hours.

This rail line has a long history.  It was originally established as the Denver and Rio Grande Railroad in the 1880’s.  It hauled passengers but was primarily used to transport gold and silver ore from the San Juan Mountains.  In 1889, virtually all of downtown Durango was destroyed by fire and in 1893, many silver mines shut down when the price of silver collapsed.  During the first half of the twentieth century the railroad continued to struggle.  In the late 1960’s, the Durango-Silverton was registered as a National Historic Landmark.  During the 1980’s the D&SNG continued to build its service for scenic tourism.  Today, they continue to provide year round service using locomotives that are 1923-25 vintage and are maintained in original condition.