To visit Helena, we parked at the Alhambra RV Park in Clancy, MT. 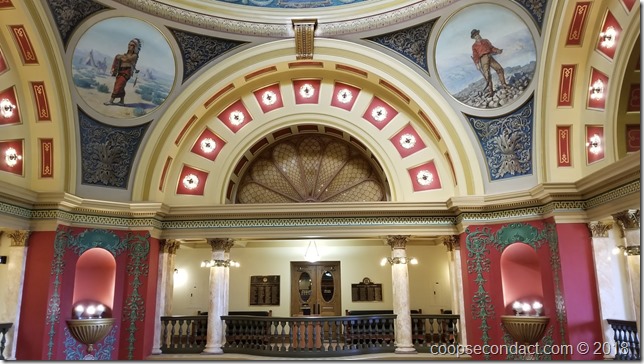 Helena, the capital city of Montana, was founded in 1864 as a gold camp during the Montana gold rush.  The area known as “Last Chance Gulch” produced one of the richest finds in the United States.  By 1888, about 50 millionaires lived in Helena, more per capita than any other city in the world.  You can see the evidence of this early wealth in the very fine homes in the Victorian neighborhoods of the city.  The Montana State Capitol building was constructed between 1896 and 1902 using Montana sandstone and granite.  We took a nice trolley/train tour of the city.

We took a drive into the hills south of Helena to visit one of the ghost towns, Elkhorn.  Silver mining began here in 1868 and continued until 1892 when the price of silver fell significantly.  In the following years, a diphtheria epidemic and the halting of rail service to Elkhorn led to a rapid decline.  At its peak, the town had some 2,500 inhabitants.  Two of the buildings, the Fraternity Hall and Gillian Hall were designated by the state of Montana as Elkhorn State Park.  The remaining land and buildings are privately owned.