Gig Harbor is located on a small inlet near the southwestern portion of the Puget Sound.  We have previously visited the Seattle area on the eastern side of the sound but this was our first time on the west side in what’s known as the Olympic peninsula.  This is a huge tract of land bounded by the Pacific Ocean on the west, the Strait of Juan de Fuca on the north and the Puget Sound on the east. 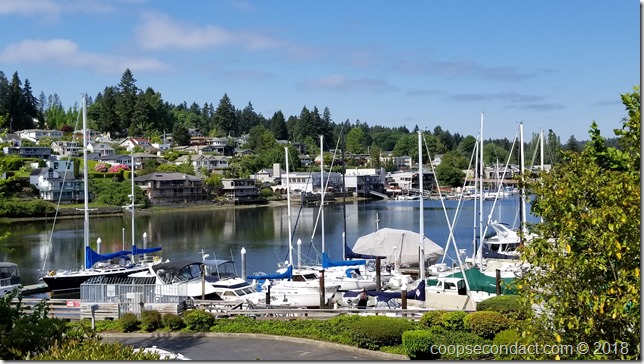 The town of Gig Harbor is a small village arranged around a beautiful bay with a large marina housing a variety of boats from modest sailboats up to 60 and 70 foot luxury yachts.  Inland from the town there is a 6.2 mile multi-use paved trail that we enjoyed for our daily walk.

The Olympic peninsula is dominated by the Olympic National Park.  Since the Olympic peninsula is not on the way to anywhere, it does not get large numbers of visitors and consequently Olympic National Park is under appreciated.  The park occupies almost 1 million acres and consists of coastline, rain forests, waterfalls, lakes, glaciers and rugged mountain peaks, including Mount Olympus at just under 8,000 feet.  We made the drive around to the main park entrance near Port Angeles, WA.  We visited Lake Crescent, Marymere Waterfall and Hurricane Ridge from which you can view glacier covered mountain tops in one direction and the Strait of Juan de Fuca and Vancouver Island in the other direction.

On another day we drove south to Tacoma to check out Point Defiance Park on the Puget Sound.  There are walking trails, marina, zoo, gardens and Fort Nisqually.  Fort Nisqually was the first European settlement on the Puget Sound, originally located in the town of DuPont, WA.  It was established in 1833 by the Hudson’s Bay Company (a British enterprise) as a fur trading outpost.  It was reconstructed on its present site in the 1930s as part of a WPA project.