Lincoln City was our next stop going north along the Oregon Coast.  We arrived just in time for the Crab Feed and Wooden Boat Show in nearby Depoe Bay.  They were serving up succulent, locally sourced dungeness crabs and showing beautiful wooden boats, many of which were built by those who were on hand to tell their story. 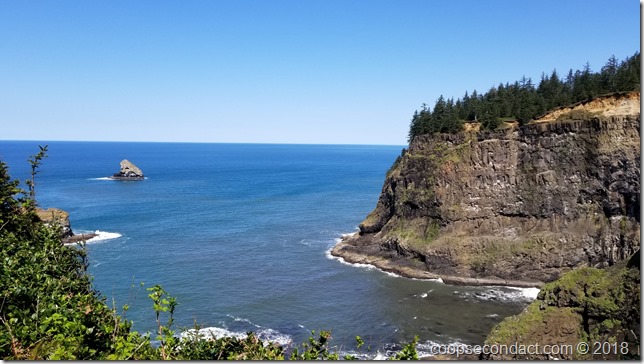 On other days we took trips north and south along the coast.  Going north we went as far as the town of Tillamook and out to the Cape Mears lighthouse then back south along the Three Capes Scenic Loop through the town of Oceanside and Cape Lookout which affords a breathtaking view of the entire Tillamook coastline.

The next day we went south from Lincoln City to the town of Newport, Yaquina Head Lighthouse, Devil’s Punchbowl and Yaquina Bay Lighthouse.  The oil wicks were first lit here on August 20, 1873.  As with most lighthouses, Yaquina Head uses a 1st order, Fixed Fresnel lens, this one made in Paris, France, in 1868 and shipped to Oregon.  Over the years the keeper’s dwelling and other related buildings were lost to decay.

Next stop:  Portland, OR