We spent a month in San Diego parked at the Mission Bay RV Resort on, surprisingly, Mission Bay.  It is a beautiful location surrounded by the Mission Bay Park and the bay itself.  There is a nice hiking/biking path that runs for miles in both directions.  It is also located 5 minutes from downtown San Diego, Old Town San Diego, Little Italy, the Embarcadero, etc.

This gave us the opportunity to explore parts of San Diego we have not previously been to.  We were close to Pacific Beach and Ocean Beach, both iconic San Diego beach towns.  We visited Liberty Station, a former Naval Training Center which was particularly valuable during World War II.  It has more recently been developed into a multi-use facility with museums, shopping and a terrific food market. 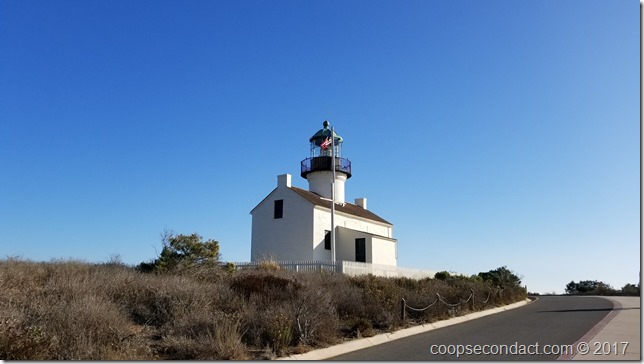 Point Loma is a hilly peninsula which sits across San Diego bay from the downtown area.  It has a rich history with many military installations over the 19th and 20th centuries.  At the southern end of Point Loma is the Cabrillo National Monument, honoring the Portuguese explorer Juan Rodriguez Cabrillo who historians believe docked his ship on Point Loma in 1542.

On one particularly nice day, we rented a small sailboat and spent a couple of hours on Mission Bay.  It’s been a while since I sailed so it was nice to have that experience once again.

On one of the weekends, Jason came down with Tad and Mia.  We went to lunch and visited the San Diego Natural History Museum, which Tad calls “Jurassic Park” since they have dinosaurs.