Sequoia National Park is one of our oldest national parks.  It encompasses a vast portion of the Sierra Nevada mountains, approximately 630 square miles, most of which is designated wilderness with no access other than on foot.  It also includes the highest mountain peak in the contiguous 48 states, Mount Whitney. 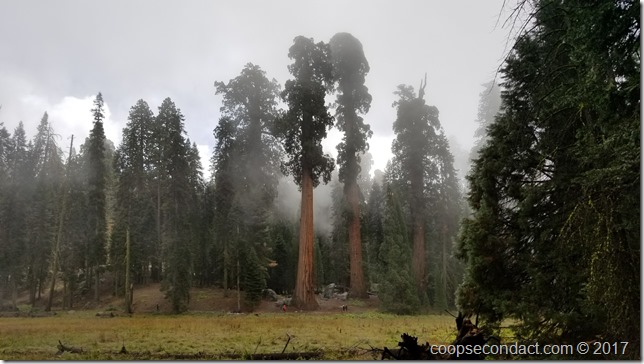 However, the main attraction here are the giant Sequoia trees.  (In the above photo, perhaps you can make out the tiny people to the right and left of the center tree.)  By volume, these are the largest trees on earth and they can only be found here on the west slope of the Sierra Nevada, usually between 5,000 and 7,000 feet of elevation.  These trees can grow to 40 feet in diameter and some are more than 3,000 years old.  They are remarkable for their size and their ability to survive fire, pests and disease.  The Giant Forest which is in the southern part of the park contains over 2,000 of these trees which are greater than 10 feet in diameter.  The General Sherman tree, considered to be the largest tree on earth, has one of its branches that is more than 6 feet in diameter.  Being in the presence of these miracles of nature is awe inspiring and humbling.

No less impressive are the coastal redwood trees which we visited back in 2014.  The redwoods can grow to be taller than the sequoias but have not attained as much diameter, the largest are up to 22 feet at the base.

We took a tour of Crystal Cave, a marble karst cave within Sequoia National Park.  It is one of 240 known caves in the park. 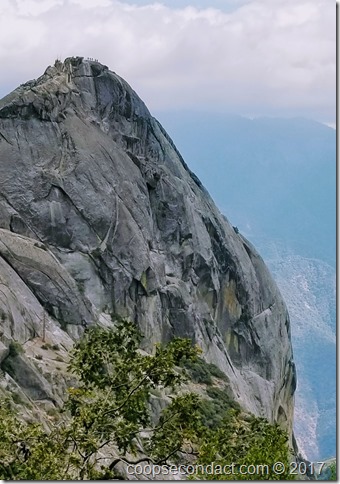 We also climbed the more than 400 steps to the top of Morro Rock, a dome-shaped granite monolith.  The first stairs were wooden, built in 1917, one-hundred years ago.  In the 1930’s the Civilian Conservation Corp replaced the wooden steps with concrete.  If you enlarge the picture above you can just make out little sticks on the very top.  Those are people at the top.  There’s a railing so it’s not as scary as it looks.

FYI, an interesting weather tidbit.  On our first day visiting the park we experienced the first snowfall of the season.  Well, they called it snow but it was little beads that acted sort of hail.  At any rate it fell for quite a while and fairly heavily during one period.  The photo above shows the accumulation.

One thought on “Sequoia National Park”