Continuing my journey west, I stopped in Willcox, AZ.  While here I parked at the Magic Circle RV Park.  Earlier in 2016, we stopped over in Benson, AZ, which is about 30 miles west of Willcox.  From Benson we visited, Tombstone, Bisbee and Kartchner Caverns. 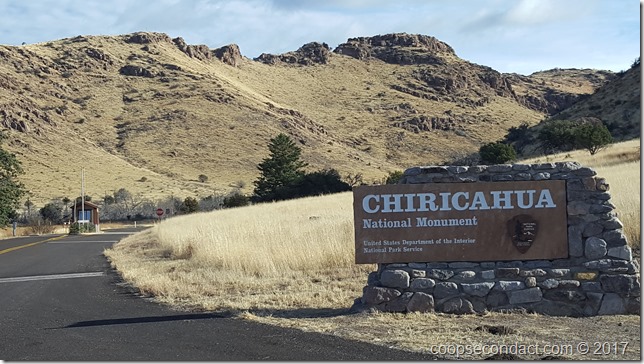 Sadly, Willcox appears to be dwindling but about 35 miles south there is the Chiricahua National Monument.  The park was established in 1924 to preserve and protect the “rock pinnacles” of the Chiricahua Mountains.  A massive volcano eruption from about 27 million years ago spread a layer of volcanic ash and pumice almost 2,000 feet thick which eventually hardened into “rhyolitic tuff”.  Over time it eroded into the vertical rock formations contained within the park.  The Chiricahua Apache called the pinnacles “standing up rocks”.

Sadly, the day I visited, Bonita Canyon Road, which leads 8 miles through the park to reach the peak, was closed so I had to be satisfied with a hike on the Lower Rhyolite Canyon Trail.  From there I was able to get some nice views of the pinnacle rocks.  I also visited Faraway Ranch, originally established in 1887 by Swedish immigrants Neil and Emma Erickson.  The Erickson’s daughter, Lillian and her husband, Ed Riggs, were instrumental in the establishment of the Chiricahua National Monument.