I would describe the shape of Cape Cod as a jester’s shoe extending out into the Atlantic from the southeastern corner of Massachusetts.  We were parked in the Falmouth area, which is near the heel of the jester’s shoe, at the Sippewissett Campground.  We took advantage of the Shining Sea Bikeway which is a 10 mile multi-use path that runs from North Falmouth down to Woods Hole, which is at the tip of the mainland on the heel of the Cape.  You may have heard of Woods Hole since it is home to the Oceanographic Research Institute. 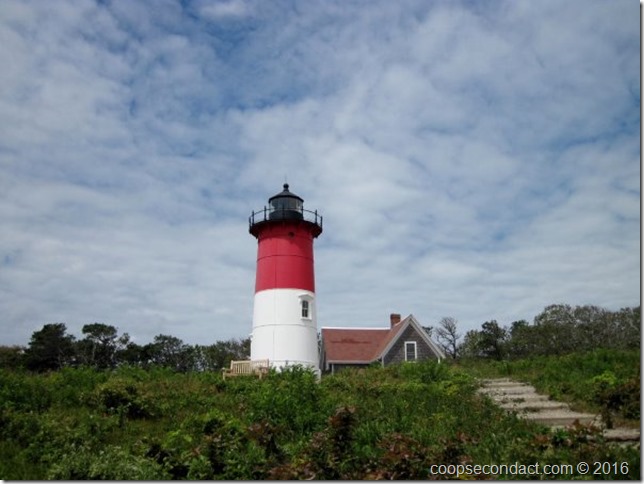 Cape Code is actually quite large.  From our spot we had to drive 68 miles to reach Provincetown which is at the very tip of the fancifully curved toe of the jester’s shoe.  Along the way we stopped off at a few points along the Cape Cod National Seashore which includes 40 miles of sandy beach, marshes, salt ponds and sand dunes.  One of the fun spots is the Nauset Lighthouse which you may recognize as the lighthouse on each bag of Cape Code potato chips.  The maker of Cape Code potato chips has been a significant contributor to the preservation of the lighthouse for many years.

Part of the history of this spot includes a set of three wooden lighthouses known as The Three Sisters which currently stand inland about 800 feet.  At one time they were on the coast but were moved when they were replaced in the 1920’s by the Nauset Light.

Provincetown is an absolutely beautiful setting which I suppose helps to explain why it is mobbed with tourists at this time of year.  You can get a breathtaking view by climbing the Pilgrim Monument, a 252 foot tower completed in 1910.  The monument houses a museum that commemorates the Mayflower’s first landing in the New World in Provincetown in November 1620. 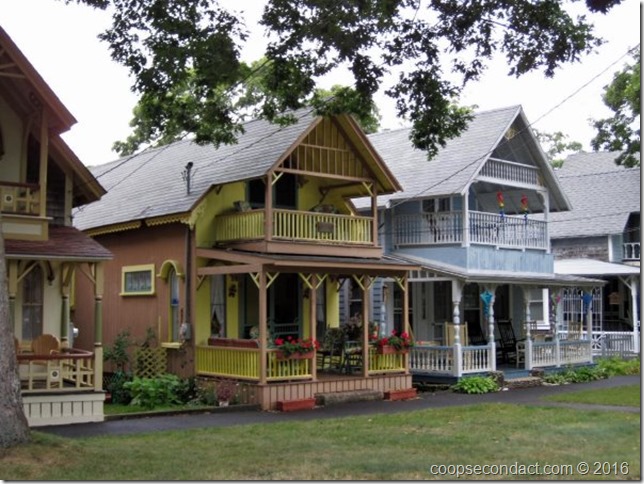 Wanting to visit one of Cape Cod’s islands, we took the ferry out to Martha’s Vineyard.  This island has several distinct communities so we purchased a day pass for the bus and spent the day exploring the towns of Edgartown and Oak Bluffs.  Edgartown appears to be the more affluent part with beautiful seaside cottages.  Oak Bluffs has a very unique section known as the Tabernacle or Camp Meeting Cottages.  Originally organized as a religious community these cottages are arranged in a circular fashion around the central park.  They have been painted and decorated in very fanciful ways and many are now used as vacation rentals.