In order to visit Boston and the surrounding area we couldn’t get much closer than Littleton, MA.  We parked at the Boston Minuteman Campground which is located close to Concord and the Minute Man National Historical Park.  More about that later.

Littleton is still 43 miles from the center of Boston but we didn’t really want to drive into Boston to deal with the traffic and parking there so we drove about 20 miles to the Riverside MBTA station in Newton, MA, and took the subway which delivered us directly to the Boston Common.  Many years ago I visited Boston on several occasions but rarely with an opportunity to be a tourist.  And as a tourist you have a unique opportunity to explore the rich history of this city and the people who, against all odds, began a series of events that led to a revolution and the formation of the United States.  We took the Freedom Trail guided tour that took us through many of the important landmarks, events and people of this formative time for our country, including Boston Common, Park Street Church, Granary Burial Ground, Old South Meeting House, site of the Boston Massacre and Faneuil Hall.

The tour also included the “new” Massachusetts State House which was completed in 1798.  It is situated on top of Beacon Hill opposite the Boston Common on land once owned by John Hancock, Massachusetts’s first elected Governor and of course a signer of the Declaration of Independence.  The dome, first covered with copper was subsequently gilded in gold leaf in 1874 and more recently re-gilded with 23k gold in 1997.

After a hot day of sightseeing, what could be better than having a cold beer at a place where everybody knows your name.  When preparing to begin shooting the TV show “Cheers”, the producers went looking for a bar that fit their vision for the show.  They went to Boston and when they visited the Bull and Finch Pub on Beacon Street they decided that it would be their model for the show.  And naturally, when in Boston one must have a Sam Adams beer.  “Cheers” was serving a Sam Adams Brick Red that is only available in Boston.  It was quite good. 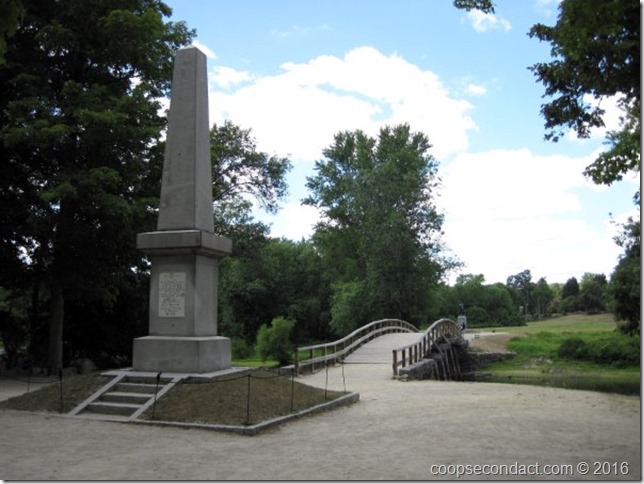 The Minute Man National Historical Park commemorates the opening battle of the American Revolutionary War, particularly the North Bridge near Concord where the Minute Man Militia faced off across the bridge from British Troops.  The British were here to look for munitions that they had come to believe were being stockpiled near Concord.  When these troops found themselves on opposite sides of the bridge, neither side knew what to do.  After some time, the militia saw smoke rising from near the center of Concord and they feared that the British were burning the town.  Not wanting to allow that they began to cross the bridge and were fired upon by the British and then returned fire.  There were casualties on both sides.  This kicked off a running battle between the two sides as the British tried to return to Boston.  This Battle Road Trail is preserved within this park.