We settled on Woodville, parking at Parnell Creek RV Park, since we couldn’t really find a suitable RV park close in to Huntsville.  Our primary objective was to visit the U.S. Space and Rocket Center in Huntsville.  Woodville is about 20 miles southeast of Huntsville.

Staying in Woodville put us very close to the Cathedral Caverns State Park.  This is a limestone cave with a large and impressive natural opening, 126 feet wide and 25 feet high.  The cave was first explored and mapped by Jacob Gurley in the 1950’s then purchased by the state of Alabama in 1987.  Gurley eventually explored it to a distance of over 3 miles.  A little less than half of this is available for the public tours.  There is a natural mountain stream that runs through the cave which they have named Mystery River since they have not been able to trace the path of the stream once it leaves the cave.  On the tour you can see many impressive formations including “Goliath”, one of the largest stalagmites in the world at 45 feet high and 243 feet in circumference. 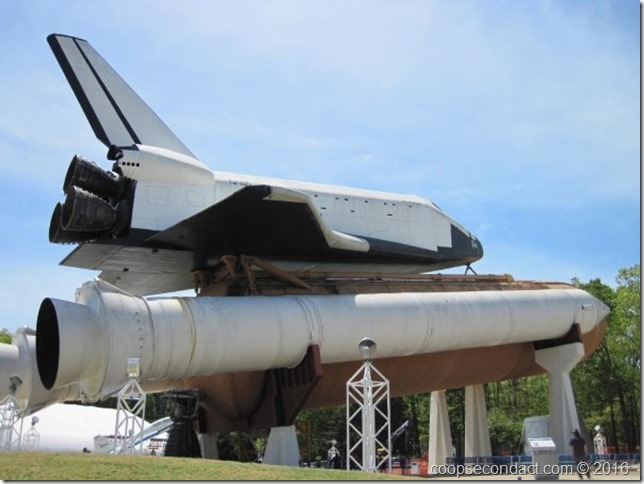 On another day we made the drive into Huntsville to the U.S Space and Rocket Center.  This museum, located along with Redstone Arsenal and NASA’s Marshall Space Flight Center, owned by the State of Alabama, showcases important artifacts from the history of rocketry and space exploration in the United States.  Following World War II, Huntsville became one of the major sites for the research and testing of rocket technology to respond to the German U2 rocket that was utilized in the latter stages of the war.  In fact, many of the German scientists were enlisted in the effort, led by Dr. Wernher von Braun.

One of the items in the Rocket Park is a full Saturn V mounted upright providing quite a stunning visual reference point.  Next door is the Saturn V Hall where another full Saturn V is displayed horizontally with the various stages separated.  Also in the Rocket Park is a “full stack” Space Shuttle mounted with external fuel tank and solid rocket boosters.  This is the Pathfinder which is actually a wood and steel mockup that was used in early shuttle development.  This is currently the only full stack space shuttle display in the world, however, the California Science Center in Los Angeles is currently in the process of mounting the space shuttle Endeavour in a full stack configuration using all real flight hardware in an upright, launch configuration.

One thought on “Woodville, AL”