We spent a week in Pensacola, actually, we were staying in an RV park in Milton which is across Escambia Bay from Pensacola.  While there we were able to get around and see a few things.

During our visit, the Pensacola Jazz Fest was underway.  It was held in Seville Square which is in the historic section of the city that was the location of a 1752 Spanish outpost.  While looking for the Jazz Fest, we stumbled upon a charity dog show being held to benefit Alzheimer’s.  It was fun seeing regular people there showing their “everyday dogs”

On another day, we went out to Pensacola Beach which is on Santa Rosa Island, one of the barrier islands along the Gulf Coast of Florida.  The communities of Navarre Beach and Okaloosa Island are also located on Santa Rosa.  At the western tip of the island is Fort Pickens, completed in 1834.  The fort was originally built in order to protect Pensacola harbor from foreign threats but eventually saw considerable action during the American Civil War. 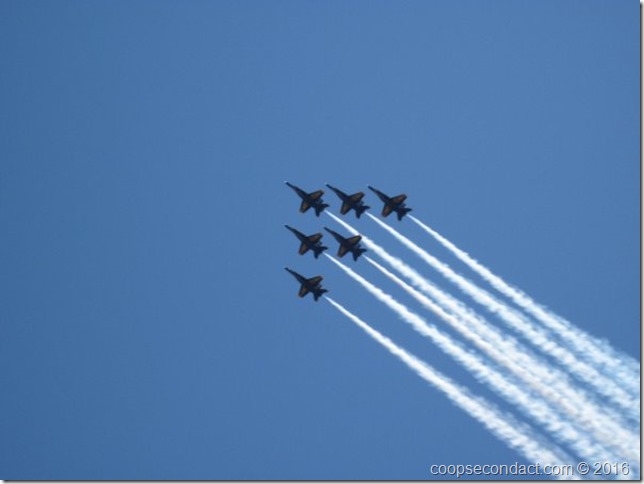 Later in the week we drove down to Pensacola Naval Air Station, home to the National Naval Aviation Museum and to the Blue Angels, the flight demonstration squadron for the Navy.  Every Tuesday and Wednesday, the Blue Angels hold their practice session and the public is invited.  The day we were there we were part of a crowd of probably 2,000 to 3,000 people.  During the practice, which ran for about 1 hour, they went through the entire set of maneuvers that they use during one of their many air shows held around the country.  It is a thrilling exhibition of precision flying.  Following the practice session we took a guided tour through the Naval Aviation Museum.  Our guide was a Navy pilot who flew a number of combat missions in Vietnam.  The museum is crammed full of a variety of airplanes as well as aviation related displays, for example, the N2S Kaydet flown by former President George H. W. Bush during his training as a Navy pilot and some of the former aircraft flown by the Blue Angels.

As a happy coincidence during our time in Pensacola, we discovered that my nephew Michael and his family were spending their spring break vacation with a group of their friends in (somewhat) nearby Miramar Beach, FL.  They invited us to join them for dinner so we made the drive down there which took us through Fort Walton Beach and Destin.  They were staying at a lovely resort in the San Destin area.  It was great being able to visit with them.