Canyonlands National Park (pics) covers 527 square miles, it is a very large park.  It’s trisected into 3 districts by the confluence of the Green and Colorado Rivers within the park.  The three districts are Island in the Sky, Needles and The Maze. 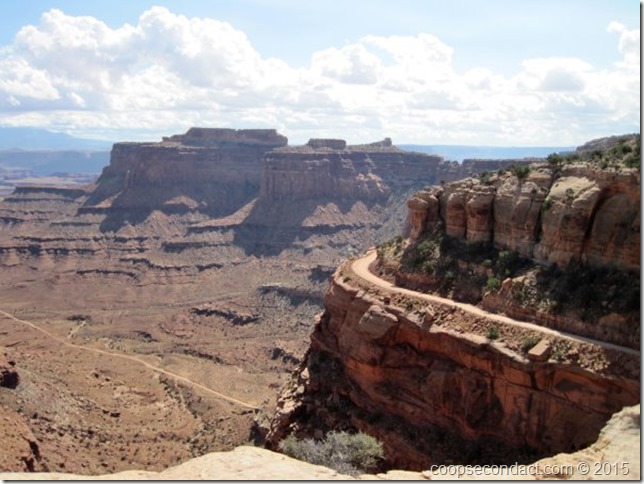 Island in the Sky, the part we visited is the northern district and can be accessed by driving about 30 miles from Moab, UT.  The Needles district is accessed from the southeast about 60 miles south of Moab.  The Maze is the least accessible area due to its confusing and challenging tight canyons with sheer walls.  Only those seeking a difficult backcountry experience make their way into this portion. 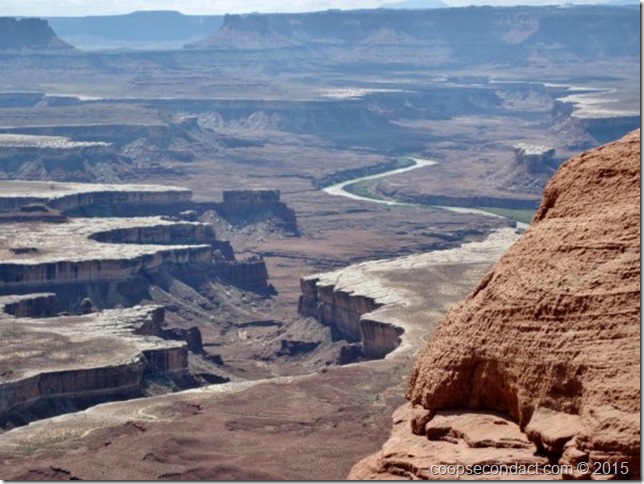 The Island in the Sky district is a broad and level mesa between Colorado and Green rivers with many overlooks from the White Rim, a sandstone bench 1,200 feet below the Island, and the rivers, which are another 1,000 feet below the White Rim.  We explored many of the parks’ features through a combination of driving and hiking:  Mesa Arch, Monument Basin, Grand View Point, Green River Overlook and Upheaval Dome.

Canyonlands, like the rest of the Colorado Plateau is a place built from layers of sedimentary deposits over millions of years and then eroded over millions of years.  Upheaval Dome is an anomaly.  It has the appearance of a caldera but it is not volcanic in origin.  In an area 3 miles across, the rocks are dramatically deformed, pushed up in a circular structure called a dome, or an anticline.  There is debate as to whether this is the result of an impact of a meteorite or from a salt dome rising up from underneath.

Valerie thinks that this park should have a more grand name, like Magnificent Canyons.  Canyonlands sounds too much like a kid’s board game and understates the scale and dramatic beauty of this most unique place.

From Moab our next stop will be Torrey, UT.