We spent the Labor Day weekend in Ogden, UT, (pics) at the Century RV Park.  Not being too familiar with the demand for RV sites during a holiday weekend, we thought it best to book something well in advance so that we wouldn’t be caught short.  However, since this RV park is not near to any particular special destination like a national park, lake or mountain area it seemed to have spots available while we were there.

We took this opportunity to visit nearby Antelope Island State Park.  Antelope Island is the largest of the 10 islands on the Great Salt Lake.  The island is 15 miles long and 5 miles wide with peaks in the interior that reach 2500 feet above lake level.  The entire island is included in the state park.  It is known for its scenic beauty affording nice views of the Great Salt Lake to the west and the city of Salt Lake City and the Wasatch Mountains to the east. 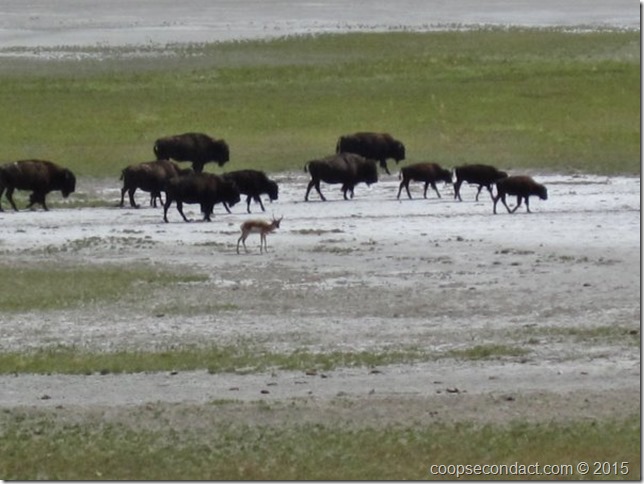 Antelope Island is most known for its diverse wildlife population, most notably the large herd of bison.  The bison were first introduced to the island in 1893 by a John Dooly who thought he could ranch them and charge people to hunt them.  That didn’t quite work out and the bison herd has had its ups and downs but survived and today they are monitored for health and kept to a population of between 550 and 700.  It is perhaps one of the few remaining places in the US where you can view a sizeable herd of bison in the open.  We were able to observe one such group of perhaps 80 to 100 bison moving together.  Quite a thrilling sight.