Arco, Idaho, (pics) is a quiet small town in eastern Idaho but staying here at the Mountain View RV Park allowed us to visit two very interesting nearby sites.

In 1955, Arco became the first town (in the free world) to have its power supplied by nuclear energy.  You may wonder, why Arco, Idaho?  The answer can be found 18 miles east at the Idaho National Laboratories, home to EBR-1, Experimental Breeder Reactor.  Under the direction of  Walter Linn, the Argonne National Laboratory pioneered the development of this breeder reactor that, on December 20, 1951, become the first in the world to produce usable electricity using atomic energy.  And, as a breeder, it produced more fuel than it consumed.  Perhaps you can imagine the excitement that accompanied this development, a clean, inexpensive means to produce electricity for decades.

This lab continued to provide the world with results of its research on this revolutionary technology.  In 1964, EBR-II began operations, having been designed and built using what was learned from that earlier research.  It was both bigger and more capable than its older sibling.  Using EBR-II, the lab spent many years developing and refining means to ensure that using nuclear energy to produce electricity could be done with a near certainty of safety.  By the time they had succeeded in this, the Three Mile Island and Chernobyl incidents had already sealed the fate of this promising technology.  This small Atomic Museum has been designated as a National Historic Landmark. 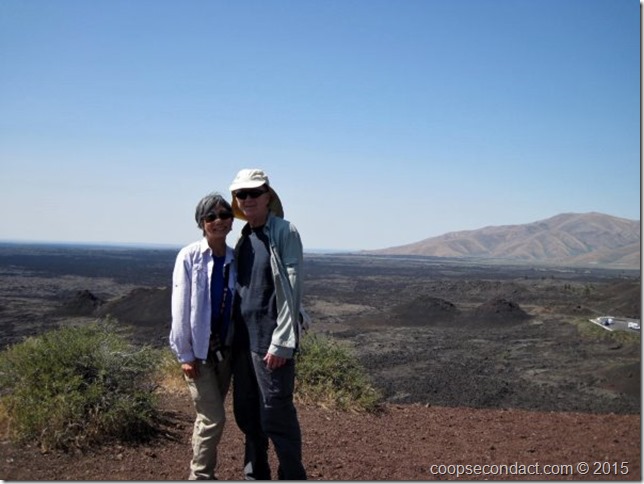 The second nearby site is Craters of the Moon National Monument and Preserve.  Until around 1920, this very large area of lava flows was a blank space on the map, an unknown, unexplored part of central Idaho.  It’s completely understandable since it is one of the harshest environments on earth.  Many portions of it consist entirely of very sharp and completely uneven shards of lava rock.  It can easily require an hour to traverse only 100 yards of this type of terrain.  Idaho part-time explorer Robert Limbert took on the challenge of exploring and mapping this area.  It lies along a 62 mile rift that runs north and south.  He and his party began in the south and spent 17 days making their way north through the area.

Beginning 15,000 years ago, lava welled up from this Great Rift to produce this vast ocean of rock, some 43,000 acres.  The most recent eruption occurred a mere 2,000 years ago and geologists believe that future events are likely.  Along the rift are a series of craters and massive cinder cones, one of which, Big Cinder Butte, is one of the world’s largest basaltic cinder cones.  Following his exploration, Mr. Limbert was successful in promoting the idea that this “weird and scenic landscape, peculiar to itself” should be preserved.  As a result of Limbert’s article being published in National Geographic, President Calvin Coolidge designated it Craters of the Moon National Monument.