Almost 8,000 years ago, the peaks of Mount Mazama (pics) towered some 12,000 feet above sea level.  But eventually, the huge chamber of magma beneath the base of the mountain would no longer be contained.  It began to erupt and eventually a series of eruptions formed a ring around the mountain and caused the mountain top to collapse forming a huge caldera. 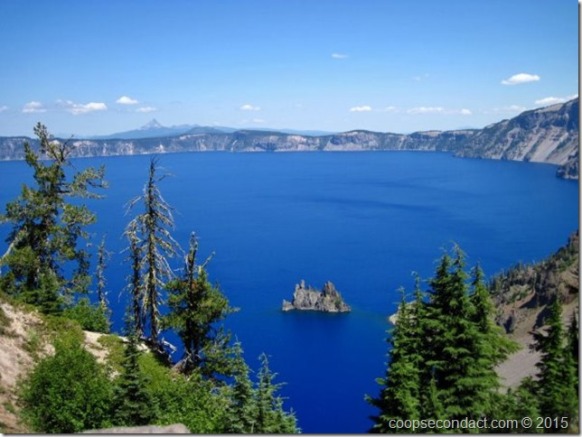 Over the ensuing thousands of years, rain and snowfall have created the deepest lake in the United States, 1,943 feet at its deepest point.  Historically, Crater Lake has averaged 44 feet of snow per year, however, recent years have been somewhat less.  Interestingly, there are no streams that feed into nor drain from Crater Lake contributing to what is thought to be one of the cleanest and purest bodies of water in the world.  In addition, due to its clarity and depth, the water in Crater Lake has an unmatched shade of blue.  It truly is shocking seeing it in person.

Crater Lake National Park is one of our nation’s oldest national parks having been established in 1902.  The 33 mile rim drive provides many opportunities to view the lake from every perspective.  There are also numerous hiking trails surrounding the lake, many of which provide additional lake views.  Only one trail, the Cleetwood Clove Trail which involves a 700 elevation change will take you down to the surface of the lake.

We visited Crater Lake on two separate days from the Crater Lake RV Resort which is in Ft. Klamath, OR, about 20 miles south of the park entrance.  Our next stop will be Bend, OR.

One thought on “Crater Lake”