York (pics) is England’s most medieval city with a web of narrow streets surrounded by magnificent 13th century walls.  And at its center is the York Minster, one of the most beautiful Gothic cathedrals in the world and England’s second most important cathedral. 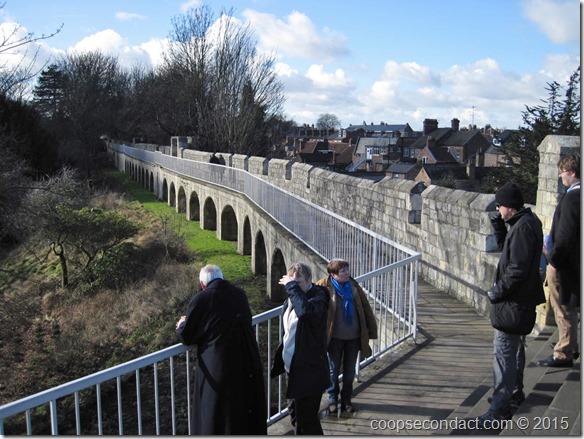 The walls around York were built along the path of the original Roman walls dating from the Roman occupation in the early 1st century AD.  You can walk along these wall which make a 4.5 mile circuit around the city.  Along the way you will encounter a few remaining “bars” (the word used to describe the Roman gates) which served as gateways allowing access into the city.

The York Minster is home to the Archbishop of York who is second to the Archbishop of Canterbury in the Church of England.  The present minster was constructed between 1220 and 1480, built on the same site and foundations as the Norman minster which was built in the 11th century.  Inside there is a 15th century choir screen with carved statues depicting 15 Kings of England from William I to Henry VI.  In the north transept is the “Five Sisters Window” with five panels over 50 feet tall with colored glass dating from 1250.  However, the most amazing window is the Great East Window dating from 1405.  If it were lying on the ground it would describe an area roughly the size of a tennis court, the world’s largest medieval stained glass window.  The scenes depicted in its panels deal with no less than the beginning and end of the world as described inGenesis and the Book of Revelations.

York is also home to the National Railway Museum, a very interesting museum stuffed with over 100 locomotives as well as carriages from the royal trains used by Queen Victoria and Edward VII.  In addition, here you can see a 1960’s Japanese Shinkansen bullet train, the only bullet train in the world outside of Japan.