For the week we spent in Paris, we rented an apartment in the 2nd arrondissement.  It is a terrific location, just a short walk to the Royal Palace, the Louvre, close to two subway stations and in an area with lots of restaurants and shops.  In addition, it is about 4 blocks from Palais Garnier (pics), one of the most famous opera houses in the world.

Our host for the apartment suggested either taking the tour of Palais Garnier or, better yet, checking out ticket availability for performances while we were staying there.  We did just that and found that we could get tickets.

Palais Garnier was constructed during 1865 to 1875 and has a little less than 2,000 seats.  The principal façade involved the use of fourteen painters, mosaic artists and seventy-three sculptors in the creation of its ornamentation.  Its notoriety got a boost when it was used as the setting for the 1910 novel The Phantom of the Opera.  On the inside, the building features a large ceremonial staircase of white marble which splits into two divergent flights of stairs that lead to the Grand Foyer.  It is likely that you will gasp slightly upon entering for the first time.  It is quite beautiful.

The auditorium has a traditional horseshoe shape and a 7-ton bronze and crystal chandelier that was designed by the building’s architect Charles Garnier.  The ceiling area surrounding the chandelier was painted in 1964 by Marc Chagall on a removable frame over the original.  The Chagall painting features scenes from operas by 14 composers. 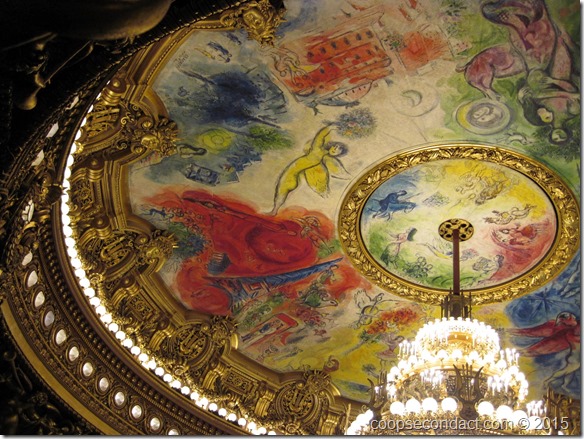 Oh, and the opera we saw was The Abduction from the Seraglio, written by Mozart and was first performed in Vienna in 1782.  It is set in Turkey and is a story about the girlfriend of a Spanish nobleman who has been captured by pirates and sold into a harem.  The nobleman tracks her down and goes about rescuing her.  The opera is performed in German and the theater features a large display above the top of the stage which showed a French translation.  So suffice it to say we didn’t understand much of the “dialog” but we read the synopsis beforehand so we could generally follow the action.  It was a terrific experience just to see the inside of Palais Garnier.

One thought on “A Night at the Opera”