One thing for sure, there’s no shortage of world class museums in Paris.  But, if you want to experience French paintings, specifically French impressionists, then you would need to double up and visit both Musée de l’Orangerie and Musée d’Orsay (pics).  You can purchase a single ticket to visit both for 16 Euros which requires that you visit both museums within a 4 day period. 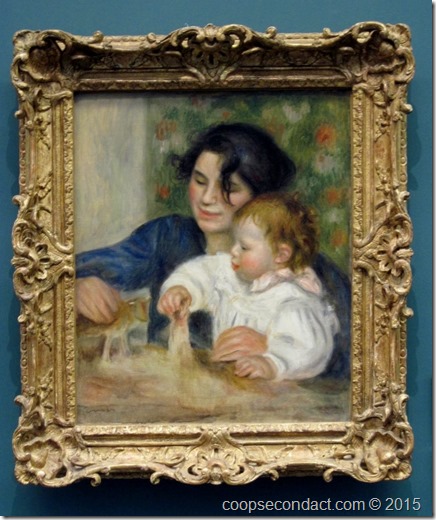 Musée de l’Orangerie is located in the west corner Tuileries Gardens next to the Place de la Concorde in Paris.  The structure was built in 1852 to shelter the orange trees on the gardens of the Royal Palace.  The big payoff here are the Claude Monet Nymphéas series of panels.  In 1922, Monet donated these 8 canvas painted panels of water lilies to be displayed in this gallery.  Two oval rooms were designed to exhibit the panels, some of which are 50 feet long.  Standing in the middle of the room you can easily feel yourself floating in the middle of Monet’s flower garden at Giverney.  We were not allowed to take photographs in this part of the gallery, but you can see some of the panels here.  But, make no mistake, this museum is more than that.  In its lower floor it also has an impressive collection representing Renoir, Sisley, Picasso, Cézanne, Gauguin and others.

Next is the Musée d’Orsay across the Seine.  It is housed in the former railway station, Gare d’Orsay which was constructed between 1898 and 1900.  This building itself is beautiful with an arched main hall and two huge clocks which face the Seine.  We always try to respect the rules within any space such as this and here they ask that visitors take no photographs.  I guess most people figure it’s OK to take pictures as long as there is no one around to tell you otherwise, even though they had signs everywhere which include the ‘no photos’ symbol.  Or, they just don’t care, don’t pay any attention to the signs or plan to plead, “I didn’t know” if they are caught taking pictures.  Even though we saw many other people taking pictures we followed the directions we were given so we have no pictures to share with you.  We did include a photo of the brochure we were given that shows some of the highlights.

This museum is a treasure trove for Impressionists and post-Impressionists.  What you can see here:  van Gogh’s Self Portrait and Starry Night Over the Rhone;  Édouard Manet’s Olympia;  Claude Monet’s Le déjeuner sur l’herbe;  Renoir’s Bal du moulin de la Galette (which is a most magnificent painting) and then they hit you with:  James McNeill Whistler’s, Whistler’s Mother.

There is just an overwhelming variety of paintings here from Pisarro, Sisley, Manet, Monet, Gauguin, Cézanne, Renoir, Degas, Toulouse-Lautrec and Rodin.  In addition, there are a large number of sculptures here including one from Rodin called Hell’s Gate which is quite amazing.