The Loire Valley is located along the middle stretch of the Loire River in central and western France.  It is a fertile area that is home to many of France’s most well known wine regions.  It is also home to a staggering collection of mostly 15th and 16th century châteaux, depending upon which source you consult, there are some 300 of these beauties located here. 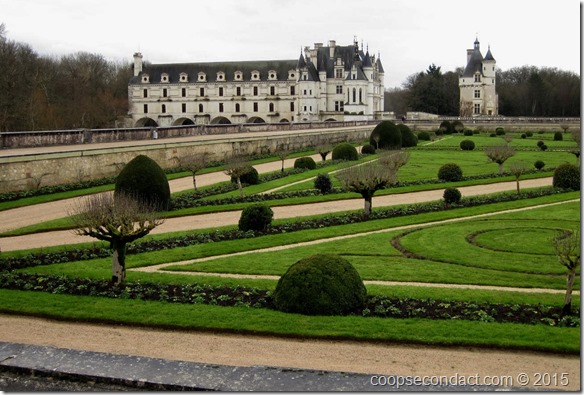 Our first stop upon entering the Loire Valley was at one of the most celebrated of these châteaux, Château de Chenonceau (pics).  It was built in the early 16th century by Thomas Bohier and his wife Katherine Briconnet.  Like many of the châteaux, they demolished a fortified castle in order to build upon this site.  There are many notable facts about Château de Chenonceau.  Perhaps the first is its location, built as it is spanning the Cher River.

In addition, this château has an interesting history that prominently features several women.  In 1547, Henri II donated Chenonceau to his favorite lady, Diane de Poitiers.  She is credited with creating the gardens as well as extending the original château by building a bridge to the other shore of the river, giving Chenonceau a unique architecture. 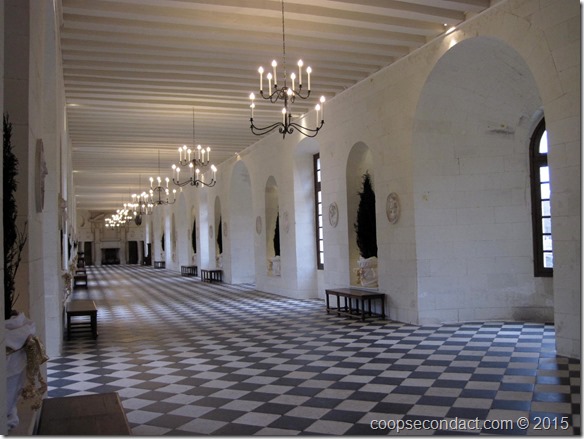 When Henri II died, his widow, Catherine de’ Medici removed Diane, enhanced the gardens and had the magnificent two story gallery built upon Diane’s bridge.  You may recall our mention of Florence’s Medici family in our earlier post and the fact that there were French queens in the family.  And don’t feel too bad for Diane de Poitiers, she landed on her feet at Château de Cheverny (more on that later).  Back to the galleries, with slate tile floors and 18 windows it is a magnificent ballroom which was opened in 1577 during festivities organized for Catherine’s son, King Henry III.

Next up at Chenonceau was Louise of Lorraine, widow of King Henri III.  Upon Henri’s death, in 1589, she withdrew to the château and went into mourning.  In fact she had a bedroom decorated for this purpose in all dark colors with objects of mourning like silver tears, grave digger’s shovels and crowns of thorns.  It is a room well suited to its purpose.

In the 18th century, Louise Dupin, a representative of the Age of Enlightenment hosted writers and poets at Chenonceau and saved it from destruction during the Revolution.  More recently, in the 20th century, the galleries of Château de Chenonceau were converted into a hospital during World War I.  Later during World War II, the River Cher was the dividing line for free and occupied France.  The south door of the gallery made it possible for the Resistance to pass many people into the free zone.

Chenonceau really has it all:  dramatic architecture, beautiful paintings and tapestries, expansive gardens and an interesting and colorful history.  Based upon our (limited) experience and the recommendation of others, if you can only visit one château in the Loire Valley, make it Chenonceau.

One thought on “Château de Chenonceau”