When it comes to fashion and finance, Milan (pics) is the capital for both in Italy.  With respect to fashion, Milan ranks among the top in the world.  I can’t really relate on that score so I’ll have to leave it to the judgment of others. 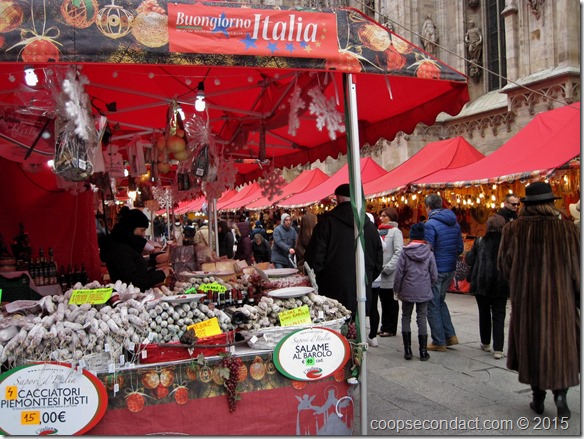 We were there during the New Year holiday and spent New Year’s Eve day touring central Milan.  We found a holiday festival in progress in the shadow of the cathedral.  All of the beautiful Italian meats and cheeses were on display along with a full selection of pastries, breads and cookies.  We succumbed to the cannoli along with a ciambelle which is a sort of Italian baked doughnut, in this case with an ample slab of chocolate cream inserted in the middle. 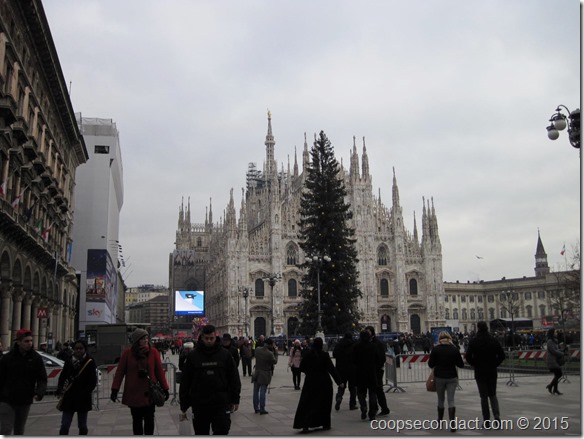 The cathedral of Milan has a pearly-white façade adorned with 135 spires and 3,500 statues, it almost overwhelms with extravagant detail.  The interior is no less impressive with domed ceilings that rise so high they must have their own climate.  The walls are lined with the largest stained glass windows in the Christian world.  Construction was begun in 1387, the scale required special canals to be dug in order to transport the vast quantities of marble needed.  The construction work took so long that referring to the project, fabrica del Dom, became a catchphrase to describe an impossible task.

We were a bit disappointed to find that the famed Teatro Alla Scalla opera house was not open for inspection.  We would have liked to see the interior with its six tiers of gild and crimson private boxes.