I won’t pretend to introduce you to the many iconic sites in this city.  Rome (pics) is truly one of the world’s great cities.  Everybody is familiar with the most notable places here:  the Colosseum, St. Peter’s Basilica, Vatican City, Trevi Fountain, Spanish Steps, etc. 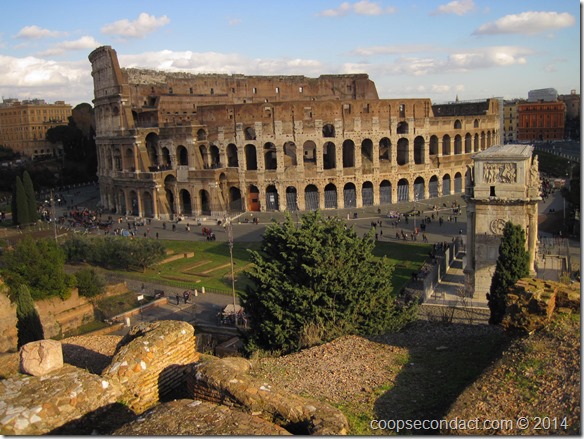 This is our first trip to Italy so we are opening ourselves to the Italian experience as well as everything about Rome.  Rather than try to be a tour guide I will simply make note of what we found to be interesting and/or inspiring.

We learned two interesting things related to the Colosseum.  Originally, the main performance area was essentially a large open pit covered by a wooden platform.  The platform was covered by sand which gave rise to the word “arena” since the Latin word for sand is “harena” (in Spanish sand is “arena”), so we refer to any space used for sports or other entertainment as an arena.  Also, the pit in the Colosseum would be flooded with water allowing for the exhibition of naval performances.  This became impossible several years after the Colosseum opened when the hypogeum was built, a system of vaulted corridors with winch operated lifts to raise men, stage equipment and beasts to the arena level through trap doors. 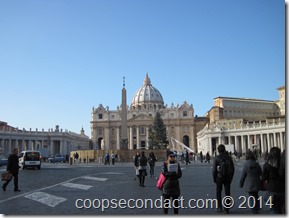 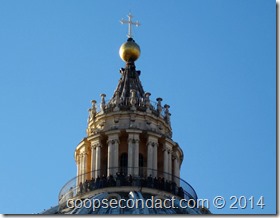 In Vatican city we visited St. Peter’s Basilica and made the optional climb up into the dome.  This brings you out to an outside walkway that rings the very top of the dome, just below what looks like a series of columns (look closely in the picture on the right and you will see the people.)  It provides a terrific 360 degree view of Rome.  And yes, St. Peters is a breathtaking experience.

The Vatican Museum exceeded my expectations.  Room after room has walls and ceilings covered in beautiful paintings, some on a massive scale, including the four “Raphael Rooms” filled exclusively with frescoes painted by the early 16th century painter and architect.  Naturally, the Sistine Chapel is a stunning sight.  There are no photos allowed so I can’t share any here.  I’m not Catholic but to find yourself gazing at Michelangelo’s paintings, arguably one of the most significant works of art in history was moving. 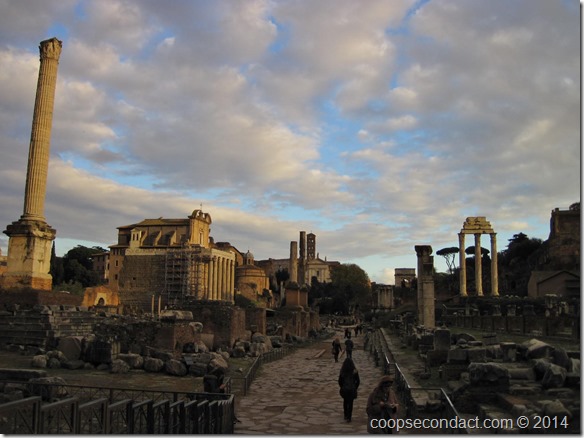 We also visited the Pantheon, Spanish Steps, Piazza Spagna, Piazza Navona, Trevi Fountain (closed for renovation), cathedrals, monuments and fountains.  We walked many of the small cobblestone alley ways that spider through the central historical section of Rome.  Here you find small shops, charming trattorias and cafes.  We also ate pizza, pasta and gelato.  Just trying to get in touch with our inner Italian.

One thought on “Rome”