Restaurants in Belize offer a variety of foods but, as you would expect, seafood is a significant part of their diet.  Two of the featured items from the sea here are conch and spiny lobster.  Both are found in abundance here but they have designated seasons when they can be harvested.  Fortunately for us, both were in season while we were in Belize.

Conch is most commonly served as ceviche or in fritters.  We had it multiple times in each form.  On one of our snorkeling outings we collected conch while snorkeling and our guide prepared ceviche right on the boat for us to enjoy.  We were directed to a restaurant called Waruguma and told they had an excellent lobster burrito.  We went and it was.  The burrito had the lobster meat of one tail and another tail was laid on top of the burrito.  It was delish and enough for two people.

Stewed pork with rice and beans 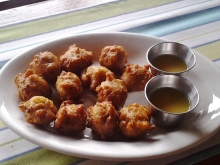 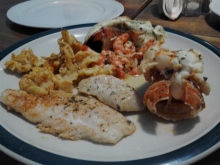 Lunch at the beach

And of course there were a variety of other items to try, BBQ chicken, stewed chicken and pork all accompanied by the ever present Caribbean rice and beans.  All good stuff.

One thought on “Belize – Eating”