When traveling in South America we have found several places with a “free walking tour”.  We went on these walking tours in Arequipa, Peru, and Buenos Aires, Argentina, for example.  These tours are technically free in that you do not have to pay anything to join the tour, however, at the end you are asked to “contribute” whatever you feel is appropriate.  For the first time in the US we found a free walking tour being offered in Seattle.  We joined it for a 2 hour exploration of downtown Seattle. 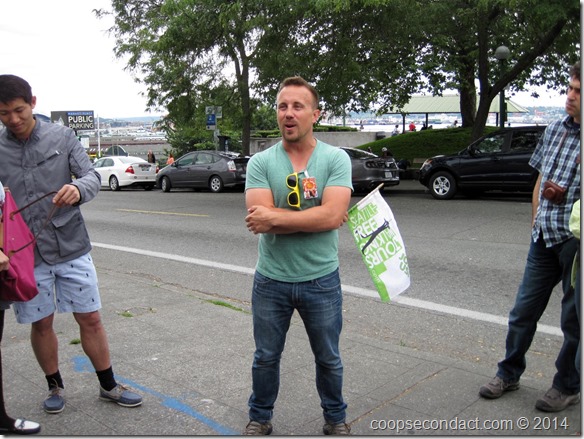 We began the tour at Pike Place Market, made our way to Pioneer Square and then along the waterfront.  We were guided by Jake who started Seattle Free Walking Tours after having traveled extensively in Europe and making use of free walking tours there.

Along the way Jake pointed out that all of the manhole covers in Seattle double as a street map for downtown Seattle.  In fact, the manhole cover maps also have symbols to help you locate most sought after places, like Pioneer Square or the Ferry Terminal, with a key to the symbols around the outside border of the map.  Clever, no?

Pioneer Square is the historic center of Seattle.  This iron and glass Pergola in Pioneer Square, dating from 1909, was an early station for the cable car system.  Originally, it stood above an elaborately appointed rest room that was called the “Queen Mary of the Johns”.  The pergola was struck by a truck in 2001 and it collapsed.  The trucking company and its insurance company paid to have it restored.

Nearby to Pioneer Square stands Smith Tower, opened in 1914.  In fact, it was celebrating its 100th birthday on July 4, 2014.  When it opened it was the tallest building west of the Mississippi River.  The building is also notable for the fact that it’s pyramid shaped pinnacle is actually a stylish apartment that was conceived and is occupied by Petra Franklin Lahaie, a former venture capitalist.  The apartment comprises the 36th, 37th and 38th floors of the building and is just above the building’s observation platform.