The Pike Place Public Market (pics) is arguably one of the most visited spots in Seattle for tourists, but make no mistake it is not just a tourist attraction.  The market, opened in 1907, is one of the oldest continuously operating farmer’s markets in the country.  It is managed by the Pike Place Market Preservation and Development Authority (PDA).

The market is home to over 200 small and independent merchants but it also has a social mission, providing a home to over 350 low income residents in addition to a senior center, food bank, child care center and a medical clinic.  This is one of the surprising facts we learned about this market.  The market has produce, crafts, clothing, musical performers, fresh seafood sellers, cheese makers, bakeries, coffee shops and restaurants.  Within its nine acre site you won’t find any mass market familiar names.  The market is dedicated to local businesses.  There are two exceptions, however for Starbucks and Sur La Table, both of which began their businesses in Pike Place Market and have been allowed to retain their original presence within.  It’s interesting to see the line outside of the “original” Starbucks, even though today it is pretty much like all of the other Starbucks stores.

The PDA is committed to retaining the look and feel of the market as well as its integrity and character.  One example of this are the day stalls.  The market has a number of these day stalls that are primarily for use by artisans to display and sell their jewelry and crafts.  These sellers must be the person who created these items, not someone who might be selling imported items.  These merchants must appear on the day when they wish to display and participate in a time honored tradition of day stall assignment.

In the early days of the market, a majority of the farmers who came to the market to sell were Japanese immigrants.  In 1942 due to the internment of Japanese Americans more than half of the stalls in the market went dark.  Naturally, few of these farmers returned once the internment ended.

During the 1960’s, with many residents moving to the suburbs and with the growth of food supermarkets, Pike Place Market fell on hard times and by 1970 the city made plans to demolish the entire site and replace it with a modern office complex.  A small group of concerned citizens found this objectionable and through a petition raised the issue to Seattle voters who passed a measure to create a historic district to include saving the market.  Today the market gets about 10 million visitors each year.

We took a tour with Seattle Bites that gave us this historical perspective as well as allowed us to sample the variety of foods available from the market.  We had crepes, Mexican tacos, smoked salmon, fresh fruit, fresh made German sausage, Greek yogurt plus wine and olive oil tastings.  One of the standouts was clam chowder from Pike Place Chowder.  After winning the Great Chowder Cook-Off in Newport, RI, for 3 years running, this chowder was placed in the Cook-Off Hall of Fame and barred from competing for 10 years.  This is good clam chowder.  Pike Place Chowder has been in the Public Market since 2003.  Our other favorite was the Greek yogurt from Ellenos.  We had their plain yogurt and it is so soft and creamy you just don’t want to stop.  Remember, these are primarily single location business with the owners directly involved daily with the business. 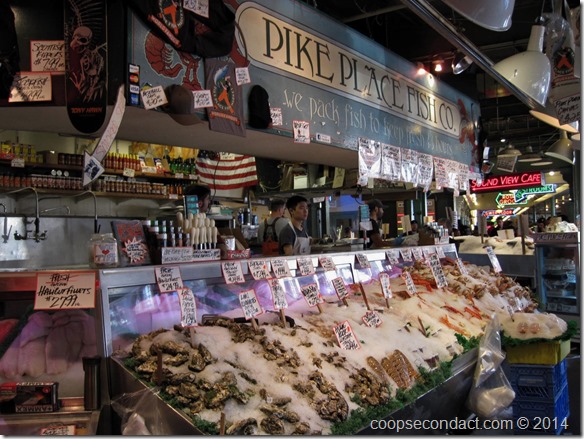 Oh, I can’t forget about the fish throwers.  In 1986, Pike Place Fish Market which is located at the main entrance to the market, was near bankruptcy.  The owner knew he had to make some changes so he hired a business coach.  At one of the meetings with the coach, one of the employees suggested becoming “world famous” by engaging the customers in games, throwing fish and generally having the staff demonstrate a fun and festive atmosphere.  They embarked on this strategy but it took 4 years to become world famous when news crews that were in Seattle in connection with the Goodwill Games filmed the performance at the fish market which led to the market being featured on Good Morning America.  Presto, world famous.