Orca Whales (pics), also known as Killer Whales and Blackfish are actually not whales at all but are among the largest members of the oceanic dolphin family.  The San Juan Islands is a great place to see Orcas since there are 3 resident pods that fish among these islands.  These resident Orcas are fish eaters, primarily salmon.

We took a whale watching tour with Island Adventures from the town of Anacortes, WA, located on the northern end of Fidalgo Island.  After each outing the onboard naturalist writes a trip report detailing the route taken and identifying the whales sighted.  You can see the trip report for our outing here which includes one of Valerie’s photos.

We had to travel about 2 hours to reach the spot where the Orcas were feeding that day, in fact we wandered a bit into Canadian waters.  We were able to spend almost an hour alongside one of the resident pods of about 20 Orcas.  In between deep dives of approximately 5 minutes they spend 5 to 10 minutes in shallow dives while surfacing and spouting.  We were treated to some of their behaviors such as a spy hop where they lift vertically out of the water, exposing about half of their body.

Following one deep dive, we were shocked and delighted when they surfaced right alongside the boat on the port side, swimming toward the stern.  Their exhalation of air was heard loud and clear.  At times we could see 15 or more fins all exposed above the water as the pod fished together.

The Orcas have a matriarchal family structure in their pods.  Male Orcas stay with their mother as long as she lives and this could be a long time.  One of the members of the pod we saw, who is referred to as Granny is thought to be more than 100 years old.  The pod’s matriarch leads all activities of the pod.  The Orcas have a complex social structure, rivaling that of elephants and higher primates.  These resident pods develop their own dialect which is taught to their young and is unique to their pod. 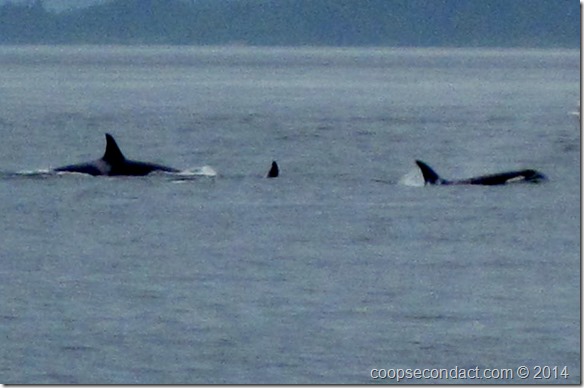 Over time researchers have developed a means to identify individual Orcas.  The most unique aspect of their appearance is the saddle patch which is a grey patch directly behind their dorsal fin.  This patch is considered unique in its size, shape and coloration from one Orca to another.  In addition, they can use the dorsal fin size and shape along with the eye patch (the while spot on the side of their head directly behind the eye) to identify the Orcas.  The naturalist on board the boat had photos of each of the resident Orcas as an aid to identifying the members of the pod.  Three pods reside among the San Juan Islands, J, K and L.  We were viewing members of the J pod.

One thought on “Whale Watching”