San Antonio (pics) is known for The Alamo, Spanish Missions and River Walk.  We were able to experience that and a little bit more during our brief visit here.

The Alamo began as Mission San Antonio de Valero which was established in 1718 but moved to its present site in 1724.  The purpose for the mission was to educate the local native inhabitants in the ways of Catholicism.  The foundation for the mission church was laid in 1744.  It served the purpose of the Franciscans that founded it until 1793 when it was mostly abandoned.  Fast forward to 1821, Mexico won it’s independence from Spain and adopted a new constitution.  In 1834 Santa Ana became the ruler of Mexico and adopted a new constitution which did not sit well with the Texans.  In 1836 General Santa Ana marched his forces to San Antonio to put down the rebellion.  The local rebels, numbering less than 200 men sought refuge in The Alamo and held off the Mexican forces numbering about 2,500.  During the siege, in another part of Texas, a provisional government was formed for the Republic of Texas and they declared their independence from Mexico.

The rebels at The Alamo held out waiting for reinforcements but none would come.  Finally, on March 6, 1836, Santa Ana and his army overtook The Alamo, killing all of the men and burning the bodies.  “Remember The Alamo” became the battle cry soon after when General Sam Houston confronted and defeated Santa Ana in the battle of San Jacinto near present day Houston effectively ending the revolution and launching the Republic of Texas. 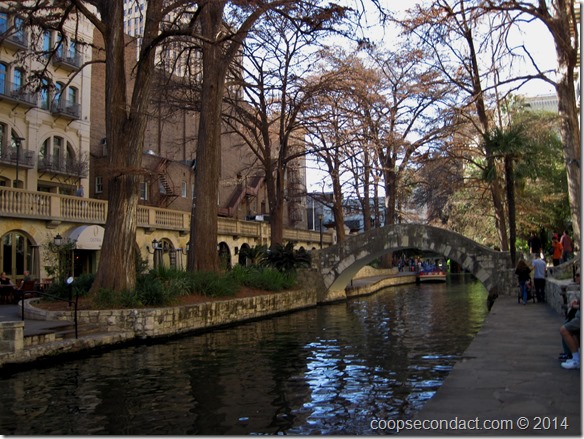 River Walk was born from a need to control flooding in downtown San Antonio.  Today it is a below street level refuge in the city.  It is lined with many restaurants and shops along this portion of the San Antonio River.  In recent years the city has extended the River Walk both north and south from downtown. 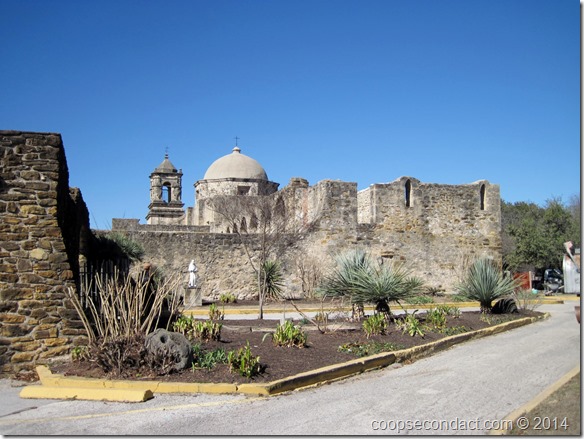 To the south the river side hiking and biking path is referred to as the Mission Reach.  It extends for about 10 miles from downtown and provides easy access to 4 other Franciscan missions, Mission Concepcion, Mission San Jose, Mission San Juan Capistrano and Mission Espada.  We rode our bikes down this path and stopped off to visit Mission San Jose.  The bike path is really nice and we got lucky with some great weather for a bike ride.