Texas is our first repeat state for this road trip, this being our second entry.  We also passed through Texas on the eastbound part of our trip, stopping in Amarillo.  This time we’re further south and will traverse about 880 miles of Texas, east to west.  In the event word hasn’t reached you,  Houston (pics) is a big city, largest city in Texas, fourth largest in the United States.  It is home to big players in the oil industry and one of the largest concentrations of medical care and research facilities in the world.  In addition, it is home to the Johnson Space Center which is one of the main reasons I wanted to make a stop in Houston. 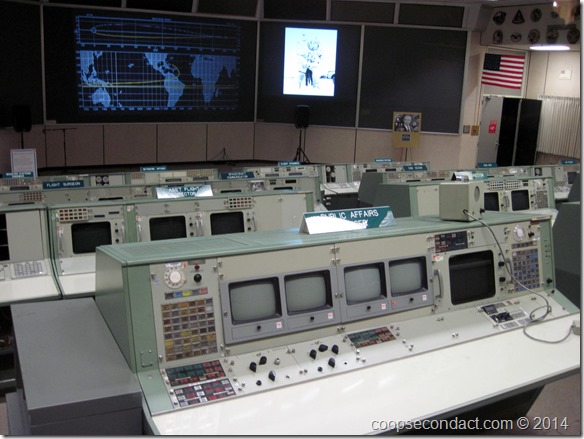 Space Center Houston is about a half hour south of downtown Houston.  This is the visitor facility for the Johnson Space Center.  Rice University donated the land to construct the JSC, originally known as the Manned Spacecraft Center which was opened in 1963.  We are all familiar with Mission Control, which is located in Building 30 of JSC, as the place where all launches were handled beginning with Gemini 4.  This facility managed all launches and missions through the Gemini, Apollo, Skylab and Space Shuttle programs through 1998 when a new more modern mission control facility replaced it.  The room has been converted back to its original configuration and preserved for historical purposes.  It is listed on the National Register of Historical Places.  This is one of the stops on the tram tour available from Space Center Houston.  We were also able to view the Space Vehicle Mockup Facility which is a working facility at JSC.  It includes the Orion Multi-Purpose Crew Vehicle which is the capsule being developed for a manned mission to Mars.

There are also a number of films available to view and hundreds of artifacts from all phases of our history in space.  Some of the more notable are the Gemini 5 capsule, Apollo 17 command module, a Skylab trainer mock-up and a complete Saturn V.  It’s really difficult to get your head around how gigantic the Saturn V rocket is even as you are standing alongside it.  Five engines, 1.5 million pounds of thrust each.

Oh sure, we also had time to visit downtown Houston and explore the Houston Tunnels, an extensive network of underground walkways that connect office buildings and apartment buildings.  In the tunnels you will also find lots of restaurants and shops so there’s hardly any need to go above ground if you prefer.  We also visited the town of Kemah which is on Galveston Bay a little south and east of Houston.  There’s a nice boardwalk there for entertainment and dining.  And Valerie particularly liked the Houston Trader Joe’s that is located in a 1940’s movie theater.  They have mock movie posters everywhere that incorporate a food message.  Very fun.

One thought on “Houston, Texas”