For our visit to Atlanta (pics), it was cold.  When we arrived it was raining and the forecast was for a rapid drop in the temperature overnight.  The next morning we were greeted with temps in the low teens and fairly strong wind.  I think the highest temperature we saw that day was 29 degrees.  A little crisp for walking around the streets of Atlanta. 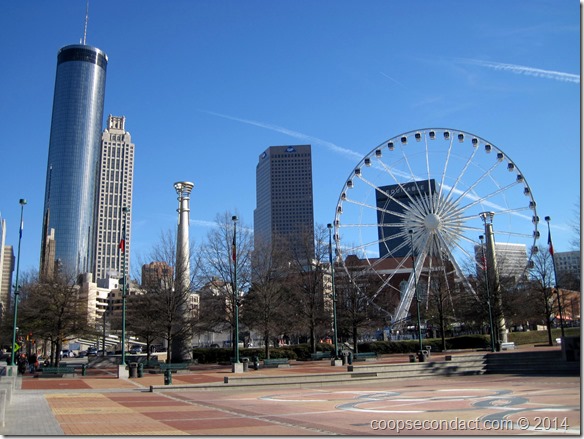 To simplify the process of getting into the downtown area and parking we chose to make use of MARTA, Atlanta’s rapid transit system.  We were staying on the south side of Atlanta near the airport and not far from a MARTA station.  So we parked there and rode the train to within a block of the Georgia Capitol Building, our first stop. 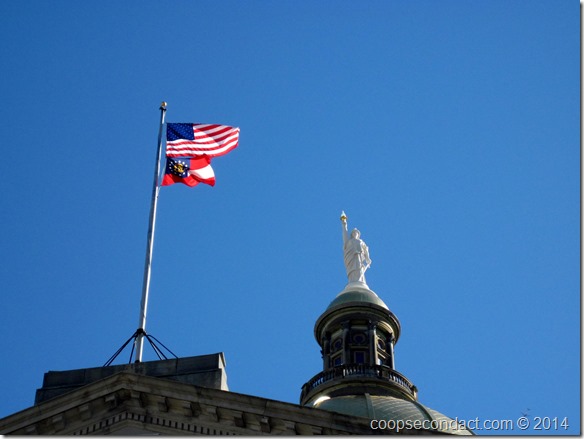 The Georgia Capitol was completed in 1889 and is topped by a dome gilded in gold and a 22 1/2 foot statue called Miss Freedom.  Prior to Atlanta, Savannah, Augusta, Louisville and Milledgeville had served as Georgia’s capital city.  The move to Atlanta was in part to help rebuild the city after the Civil War.  The interior of the Capitol has been returned to the way it looked when it was first occupied.  Throughout the Capitol there are portraits of past governors and other important Georgia residents including Dr. Martin Luther King, Jr.  His portrait was placed here by Jimmy Carter during his term as Governor of Georgia.

After our visit to the Capitol we wandered through Underground Atlanta, a sort of submerged city that runs along Upper and Lower Alabama Street.  Underground has a long history and today it is a collection of various shops and restaurants.  In addition, we walked over to CNN Center.  The home of this world wide news organization is itself a very popular tourist destination.  The building has a huge multi-story atrium lobby with a CNN Store, a food court and of course large TV monitors with a live feed of CNN and other Turner Broadcasting properties.