The South Carolina Capitol or State House in Columbia (pics) had a difficult beginning.  Construction began in 1851 but the architect was dismissed for fraud and the structure was largely dismantled.  A new architect restarted construction in 1855 but had to be halted in 1865 due to the Civil War.  The unfinished building was damaged by artillery shells when Sherman’s army occupied the city.  Construction was finally completed in 1907. 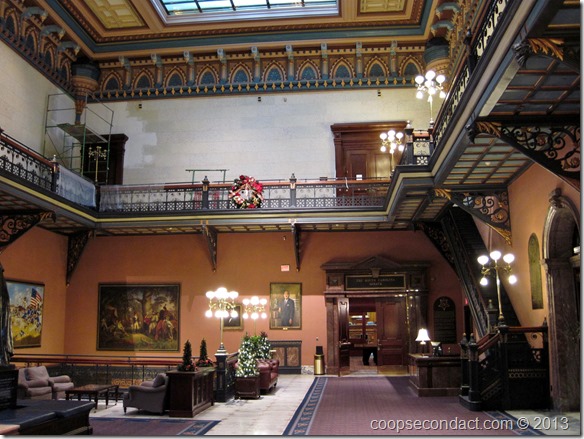 When we visited the State House we were able to have a guided tour.  The tour guide was a good representative for his state.  He was able to point out the many accomplishments of South Carolina’s residents as well as many significant unique aspects of the state’s culture.  He seemed to exhibit a little chip on his shoulder like he wanted us to know that South Carolina has a lot to offer and has played a large role in our history.

Our one night stop in Columbia didn’t allow us to see much more than the State Capitol and the Riverfront Park.  Columbia sits at a point where the Broad River and the Saludo River combine to form the Congaree River.