A little north and west from Santa Fe you can find the 33,000 acre Bandelier National Monument (pics).  Here on the Pajarito Plateau can be found evidence of human occupation dating back over 10,000 years.  Volcanic eruptions from 1.5 million years ago sent 1,000 feet thick layers of ash across the landscape.  As the ash cooled, it welded into a relatively soft rock called tuff.

Ancestral Pueblo people began making their home here around 1150.  Along the cliff face you can explore their cavates which were carved into the tuff.  In most cases they also built huts at the base of the cliffs.  You can see the holes in the cliff face that held the logs that supported the hut’s structure.  You will also see petroglyphs high on the cliff face.  Apparently these were carved while standing on the roof of the huts. 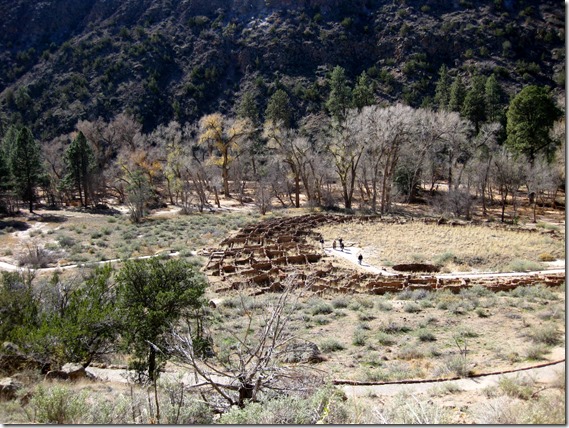 On the canyon floor you will see the remains of a large village that was built using blocks of tuff.  There are also several “kivas”, large round rooms dug into the earth.  They had a block wall and would have had a roof at ground level.  The kiva was used for ceremonial and educational meetings.  This would have been one of a network of villages in this area.

In some of our photos, you can see large piles of logs and debris.  In September of this year, heavy rains here and to the north in central Colorado caused 3 days of flooding on the canyon floor.  They have only begun to clean up and repair some of the damage.

This park provides us with an interesting glimpse into the lives of these early native inhabitants.