We’ve been fortunate enough to have visited two of the world’s deepest canyons this year.  First was Colca Canyon in Southern Peru back in early July and now Grand Canyon (pics) in Northern Arizona.  Some of the signage at Grand Canyon says something like:  “Grand Canyon may not be the deepest or the widest but most people agree that it is the grandest.”  Couldn’t say it better.  Also, Grand Canyon is much more accessible than Colca Canyon.  You can explore on various hiking paths on foot or on mule and you can view the canyon along the southern rim on foot, bicycle, car or free shuttle bus. 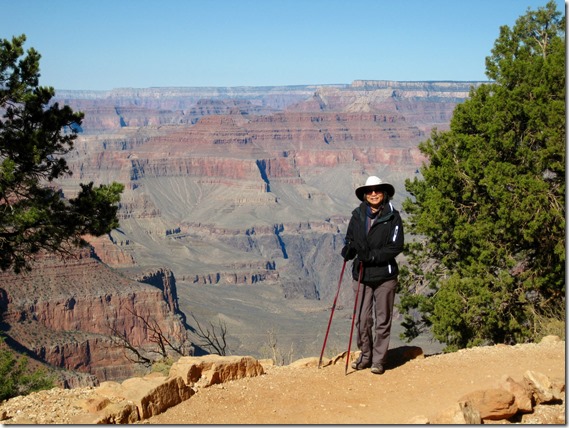 Grand Canyon needs no introduction.  It never fails to leave the visitor with a sense of surreal awe.  It’s so big, so beautiful, so intriguing as to how it came to be and it’s such a geological wonderland.  We have both visited Grand Canyon before but this has been a more extensive exploration for us.

We spent two days here.  The first day we hiked a portion of the South Kaibab trail.  This trail lies to the east of the Village and Visitor’s Center.  It is one of three trails that allow the hiker or mule rider to descend to various depths within the canyon.  The South Kaibab trail runs along an exposed ridge affording nice views both east and west within the canyon.  We honestly didn’t condition ourselves enough for a strenuous hike so we limited ourselves to a 3 mile round trip on this trail with a 1,120 foot drop in elevation.  Awesome views.  Later in the afternoon, we walked along a section of the rim they call the Trail of Time where they have samples of the rock found at the various layers exposed within the canyon, some dating back 2 billion years.  We were able to hear an entertaining ranger explaining how the canyon came to be what we see today.

On our second day we rode our bikes along Hermit Road which runs along the rim to the west from Grand Canyon Village.  The road is 8 miles long ending at Hermits Rest.  There are many lookout stops along the way that afford more great views.  This round trip took us about 6 hours with lots of stops for snacks, water, rest and gawking.

We look forward to returning, perhaps with the proper conditioning we can hike to the canyon floor.