During the 1970’s, various leftist Marxist groups in Argentina agitated for economic and social improvement.  Some of the groups carried out attacks on police and military targets and it’s thought that they were responsible for thousands of deaths through killings, kidnappings and bombings.  In 1975 the military and police were empowered to “annihilate” the left wing subversion. 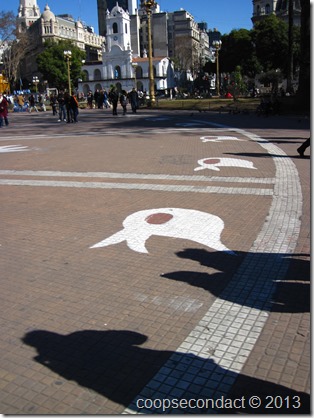 In 1976, the military removed the president and suspended the Congress.  The Dirty War was a period between 1976 and 1983 when Argentina was ruled by this military dictatorship.  During this time, the military actively sought out those that were considered to have participated in the earlier attacks on the government.  Anyone associated with activist groups, journalists, students and trade union members were kidnapped, tortured and killed.  Estimates are that as many as 30,000 people were killed during this period.  These were The Disappeared.

In many instances, the disappeared had children or children were born to women who were being held prisoner.  These children were taken and “given” to military families.  It is estimated that as many as 500 children were placed in this manner.  The grandmothers of these children began coming to Plaza de Mayo to bring attention to this issue.

Over the years, the Asociacion Abuelas de Plaza de Mayo (the Grandmothers of Plaza de Mayo) have been able to re-unite some of these people with the real families.   Their efforts are memorialized by the graphic painted on the plaza around the Piramide de Mayo.  The graphic is a depiction of a woman’s headscarf such as that worn by the grandmothers.  Representatives of this group still gather once a week in Plaza de Mayo.