About 4 hours south of Lima, Ica is an agricultural center, home to the leading Peruvian wine producers and gateway to Huacachina.  Apparently, Ica churns out large amounts of asparagus, cotton and fruits.  It’s hard to imagine since it is very dry and dusty.  We’re told that it hardly ever rains here and is known as the “city of the eternal sun” (photos). 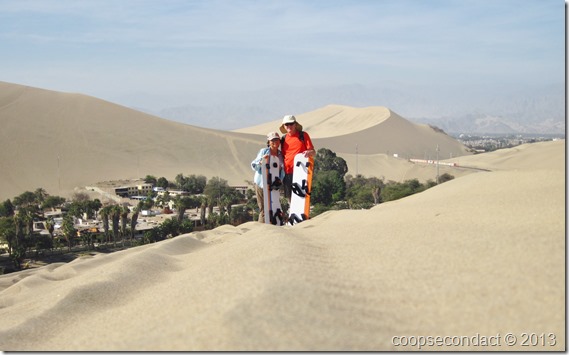 Just to the west of Ica there is a large area of massive sand dunes and an honest to goodness desert oasis called Haucachina.  The “town” sits around the shoreline of the small lake that is the heart of the oasis.  The lake is at the base of very large sand dunes.  Haucachina consists of hotels, restaurants, tourist shops and groups selling dune buggy rides and renting sand boards.  That’s right, sand boards, they are like snow boards for the sand.  Some have mountings to hold your feet very much like a snow board and can be ridden in a similar manner.  For the beginners (us) the boards had straps that you can use as hand holds so that you can ride the board on your stomach with your legs bent at the knee.

We rented the beginner boards for an hour.  They give you a small candle to use to apply a light coat of wax before each ride down.  The higher you start from the more wax you will need since the sand rubs it off pretty quickly.  The tough part is getting up hill since your feet sink into the sand while trying to climb.  It’s a slog.  We ended up taking about 4 rides down and it was pretty fun.  We only climbed up to about a third of the way up the hill. 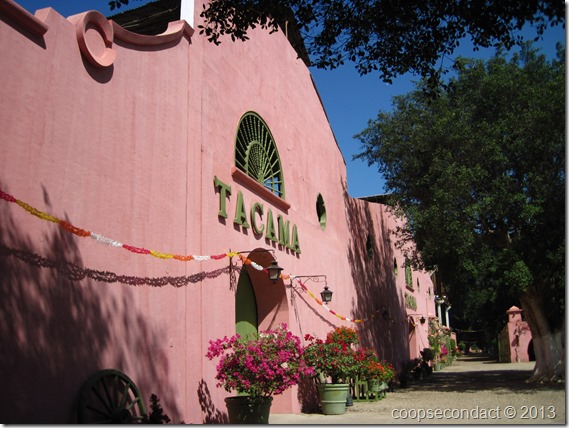 The wine produced in Peru is not nearly as well known or as highly regarded as that from Chile or Argentina but Ica is home to some of the leading Peruvian producers.  We visited Bodega Tacama, one of Peru’s oldest and most highly praised.  Tacama claims to have been the first vineyard in South America having been established in 1540.

Most wine growers in Peru also distill Pisco, the grape brandy used to make their signature cocktail, the Pisco Sour.  During our visit, we were given a short tour of the winery and given a taste of their sparkling wine, one of their white wines, one of their reds and the Pisco.  The sparkling wine was very good and the white was also quite nice, similar to a sauvignon blanc.

From here, we will make the short trip a little further south to Nazca.