We left the beach paradise of Canoa on May 25, taking a local bus to Bahia de Caraquez, then catching a bus from there to Guayaquil, about a six hour trip.  We stayed overnight in Guayaquil in order to connect with an international bus from there to Lima.  The bus company is Cruz del Sur, a Peruvian bus company.  They operate a bus service they call “Cruzero” that is a two level bus.  The lower level is a “VIP” service with large, very well padded seats that recline very far back and are spaced so that you don’t have the person in front of you in your lap.  The upper level is more traditional type of seating.  They provide meal service, similar to an airline, so that there are very few stops. 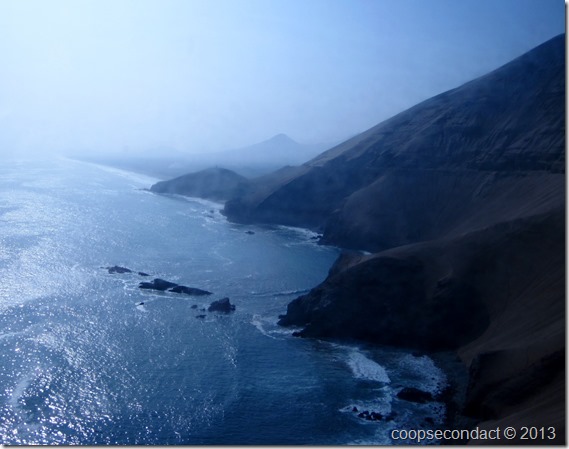 Since this was to be a 28 hour trip, we chose the VIP service.  The bus left Guayaquil on Sunday at 2:00pm.  We made the border crossing into Peru at around 6:00pm.  Conveniently, the Ecuador exit desk is right next to the Peru entrance desk so that we only needed one stop.  We arrived into Lima at approximately 5:00pm on Monday.  We chose to take this long ride directly to Lima since most of the places we want to visit are in the south of Peru.

Lima is a big city, one of the largest of all of South America.  We stayed in the Miraflores section which is an area of newer construction with a lovely coastline and lots of shopping and restaurants.  It is a solidly upper middle class neighborhood with lots of high rise condos and apartments with even more under construction.  There is a very nice parkway along the coast, Malecon de la Reserva, with walkways and lots of green areas with trees, benches and children’s play areas.  It runs along the top of the cliffs that front the shoreline. 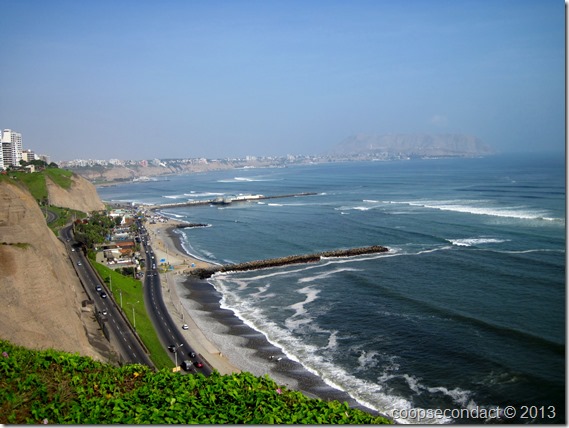 The weather is quite nice – upper 60’s during the day.  During Lima’s winter, April to October, most days will find the city steeped in fog known as garua.  It is a mist that turns the sky white and casts a pall over everything.  In southern California, we refer to this as June gloom, but in Lima you can expect to see this almost every day during this time of year.  You will notice this is some of our photos.

On one of our days here, we took a walk into central Lima to the main plaza, Plaza de Armas.  We wanted to view the changing of the guard ceremony that takes place every day there at noon in front of the presidential palace.  We arrived in time for the start of the ceremony.  Within 8 to 10 minutes, a group of demonstrators entered the plaza shouting and blowing horns.  They came right up into the group where we were standing.  Almost immediately, police came and began directing the people there to watch the ceremony (us)  to move off to either side of the plaza.  A couple of minutes later, an armored police vehicle came into the street in front of the demonstrators.

We don’t know what set things off but very soon after that we could see a cloud of smoke among the demonstrators and the armored vehicle, which had a water cannon on the roof, began shooting water into the crowd and driving toward the crowd which began to disperse into the plaza.  Well, things began to get worse from there, riot police came, both on foot and mounted on horses.  They began to drive the demonstrators away from the plaza and once we saw that they were swinging their clubs into the demonstrators, we know it was time to get far away.  This all happened within the space of less than 10 minutes so clearly the police are well prepared to respond to this kind of activity.

Clearly they chose that particular time to disrupt the Changing of the Guard in order to draw attention to their cause.  They succeeded in disrupting the ceremony, we were not able to view it to the end.

Now we will leave Lima and head south to the city of Ica.