Chichen Itza (photos), pronounced chee–chen eat-sah, is the best known and arguably best restored of the Yucatan Maya sites.  Since it was included in the list of the new seven wonders of the world, everybody wants to have a look and busloads of tourists are brought in daily.  We chose to book a room in the small town of Piste which is just to the west of the entrance to Chichen Itza.  This allowed us to walk the mile or so to and from the site. 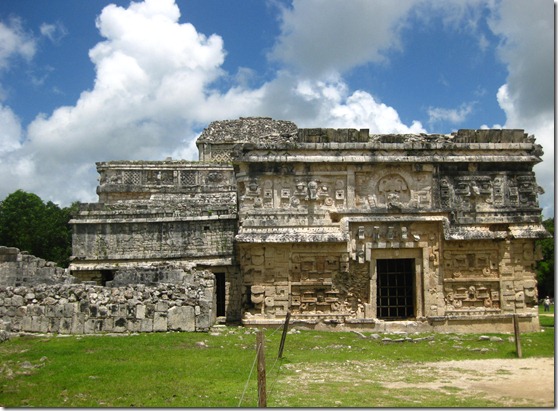 The first major settlement of Chichen Itza occurred around 300 AD by the Maya who subsequently abandoned it during the late 9th century.  It was resettled around the late 10th century and shortly thereafter invaded by the Toltecs who had migrated from their central highlands capital north of Mexico City.  As a result, Chichen Itza displays a fusion of the Maya and Toltec cultures.  Throughout the city you will see images of Chac, the Maya rain god and Quetzalcoatl, the plumed serpent of the Toltecs.  The Toltecs were even more enthusiastic than the Maya about human sacrifice resulting in numerous carvings around Chichen depicting the ritual.

The dominant structure here is El Castillo which symbolizes Chichen Itza.  The inner structure is Maya but the structure we see now, which was built over the original one, is Toltec.  The structure is actually a giant Maya calendar.  It’s nine terraces are divided by a staircase resulting in 18 terraces which represent the 18 20-day months of the Maya Vague Year.  Each of the four staircases have 91 steps each, plus the top platform totals 365.  During the spring and autumn equinoxes, light and shadow form a series of triangles on the side of the north staircase that mimic the creep of a serpent.  (Apparently, the crowds reach epic proportions during these times.)

Gran Juego de Pelota is the largest and most impressive of the Maya ball courts in Mexico.  It is bounded by temples and high walls with stone rings cemented up high.  During the Toltec period there are indications that the losing captain and perhaps his teammates were sacrificed.  Now that’s incentive.  There are carvings along the walls depicting players being decapitated.

The Templo de las Guerreros (Temple of the Warriors) was once a grand structure that contained richly colored carvings of plumed serpents, warriors and priests.  It is connected to other structures by the Plaza de las Mil Columnas, Plaza of a Thousand Columns.

There are many other structures but the ones we are allowed to see represent less than 10% of the total discovered so far.

At night, there is a light and sound show which gives some of the history of Chichen Itza and provides a glimpse of what happens during the equinoxes.  We did our walking tour of the site early in the day before it got too hot and before the bulk of the tour groups arrived.  This allowed us to go back to town to rest and have a meal before the show at 8:00pm.

One thought on “Chichen Itza”