Merida (photos) is the capital of the Yucatan state of Mexico and is the center of the Mayan culture for the Yucatan peninsula.  The Mayan settlement that once stood where Merida now stands came under Spanish rule in 1542.  The Spanish conquistadors proceeded to build Merida into the regional capital, dismantling the Maya pyramids using the material to build the cathedral and other important structures, a familiar theme.  The cathedral, Catedral de San Ildefonso is said to be the oldest church in Mexico and North America. 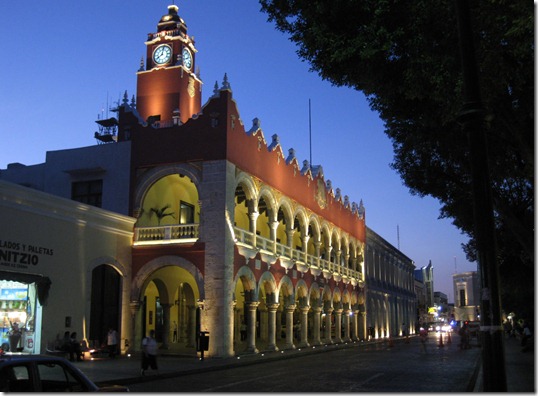 Plaza Grande, or ‘El Centro’ is one of the nicest plazas in Mexico.  It has lots of tree shaded benches with wide sidewalks bustling with shoppers and groups of tourists being shown the sights around the plaza.  Each day the tourist office leads a free walking tour explaining the early history of Merida.  When we took our first walk around the main plaza we were stopped by 3 locals who spoke to us in English and asked where we were from and pointed out some of the interesting points of interest in town.  We thought that the people here were the most friendly and welcoming we had encountered anywhere.  We had to laugh at ourselves after we realized that each one had made a point of directing us to a particular market for Mayan artisan items like hats, blankets, jewelry and other items.  Each one had stressed that the market they were directing us to was the only place we should consider buying these items since it was the only place for genuine Mayan made goods and the only place that would directly benefit the Mayan people.  Over the next few days we would encounter several other attempts to give us the same pitch

While in Merida we took the opportunity to visit two nearby unique sights:  Uxmal and Cenotes de Cuzama.

Uxmal, pronounced oosh-mahl in Mayan, ranks among the top Maya archaeological sites.  It is a large site with impressive structures in good condition exhibiting a variety of ornamentation.  Dating from about 600 AD, Uxmal grew to have a sizable population even though it is in a dry region.  To cope with the dry conditions, the Maya developed a systems of reservoirs and cisterns lined with lime mortar to catch and hold the water from rainfall.  The scarcity of rainfall meant that Chac, the rain god was supreme in importance and his image can be seem all around the site.  The most dominant structures are:

Casa del Adivino, a 39 meter high temple set on an oval base with sloping sides.

Cuadrangulo de las Monjas is a set of 4 temples each built with a different style and at different heights.  Archaeologists speculate that they could have been used as a military academy, royal school or palace complex.

On another day we took a tour to the cenotes at Cuzama, a very impressive set of 3 limestone sinkholes located on a former hacienda.  In the Yucatan, there are very few rivers or lakes.  The water is in subterranean bodies of water among the limestone rock formations.  Some of the caverns are near the surface and have holes through the ground above.  These sinkholes are referred to as cenotes.  They can be found throughout the Yucatan peninsula.  On this hacienda, they have little wagons pulled by horses that run on metal tracks to take visitors to the set of 3 cenotes.  At each you climb down the steps to a platform below from which you can jump into the cool, clear water.  It’s very refreshing and a very neat experience.