“Morelia is the coolest place you’ve never been.”

This is how our guidebook begins the section on this city (more photos) of 650,000 people that is a little more than halfway between Guadalajara and Mexico City and I’m inclined to agree with the writer.  The historical center of the city is filled with 16th and 17th-century stone buildings with baroque facades, balconies with iron railings and archways fill the interior courtyards.  There are nice restaurants, sidewalk cafes, rooftop lounges, museums and, of course, beautiful churches.  We’d like to share our list of the top 5 coolest things about Morelia, but first, a word about bus travel in Mexico.

Bus travel here is a bit more advanced than what we have experienced in other Latin American countries.  There are generally, 3 classes of bus service:  Executive (generally for longer trips), First (available between most cities with direct service) and Second (generally for more local travel with frequent stops).  We traveled from Guadalajara to Morelia on a First class bus operated by Primera Plus.  At the bus station in Guadalajara, there is a formal boarding process with a brief security check and “carry on” bag examination.  Any luggage you want to store below is checked in and you are given a claim check.  Upon boarding you are given a canned soda or bottle of water along with a simple packed sandwich.  The seats are comfortable and recline to about a 45 degree angle.  There are video screens throughout the bus and you can use provided headphones to listen to the movie (in Spanish) or to listen to music.  There are men’s and women’s bathrooms at the rear of the bus.  Our trip was a little less than 4 hours with no stops.  Naturally, this costs a good bit more than more common bus service but it was very pleasant and comfortable.

Top Five Coolest Things About Morelia (In no particular order)

At the east end of the Centro Historico you will find a large fountain, Fuente Las Tarascas, which consists of three topless indigenous Tarascan women holding aloft a tray of fruit.  Beyond the fountain is the shaded and cobbled Calzada Fray Antonio de San Miguel, a wide, romantic pedestrian promenade.  Along each side, running the full length of the walkway there are stone benches.  Branching off of its west end is Callejon del Romance, Romance Alley, a narrow walkway surrounded by pink stone walls and trailing vines.  On the east end, the promenade ends at Plaza Morelos which contains one of the many statues of the local hero for which the city is named, this one is very impressive with him mounted on a horse.

As you walk along the streets in the historical center of Morelia and look through the open doors, you will frequently be looking through a short hallway to the interior courtyard.  Invariably, these courtyards will have stone columns and archways similar to the photo above.  I want to live in a building with an interior courtyard like this.

Many of the church bell towers are lighted at night providing a beautiful view from the rooftop patio of our hotel.  On Saturday nights they shoot fireworks over the main cathedral. 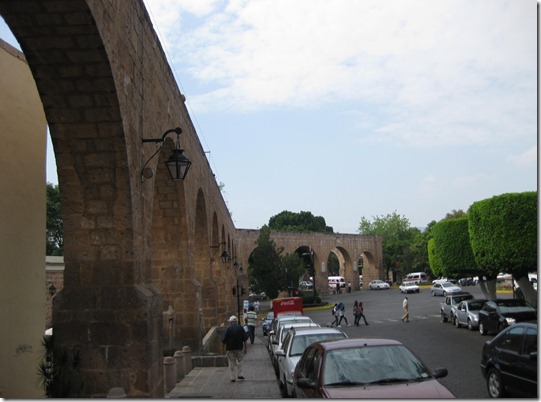 El Acueducto (Aqueduct) runs for several kilometers through Morelia.  It was built between 1785 and 1788 to meet the city’s growing water needs.  It has 253 arches many of which span streets in modern day Morelia.  What’s really cool about El Acueducto is what it says about the people of Morelia.  Even though the aqueduct serves no useful purpose it is still standing and is in very good condition.

There are a number of very cool places to visit in the area surrounding Morelia.  We took a day tour to 4 such places.  First was Quiroga, a bustling market town with lots of artisan shops.  It is also considered to be the capital of carnitas with lots of carnitas stands around the main plaza.  One simply has to have some.  Next was Tzintzuntzan, once the capital for the indigenous Purepecha people.  The Purepecha successfully defended themselves against the Aztecs for centuries until the Spanish showed up.  We then took a boat ride on Lago de Patzcuaro to the island of Janitzio, a popular weekend and holiday destination.  Take the 300 or so steps to the top of the island where you can climb up inside the statue of Morelos and peek out from his upraised wrist.  Yes, we did that.  Finally, we stopped into the town of Patzcuaro, a nicely preserved colonial town with a very lovely main plaza, Plaza Vasco de Quiroga, the second largest in Mexico.  We contributed to the local economy while visiting Casa de los Once Patios (House of Eleven Patios), a very cool Dominican convent from the 1740’s that now houses shops showcasing many of the region’s special artisan crafts.

Should you find yourself in the western highlands of Mexico, make some time to visit Morelia and some of the other interesting spots in the Mexican state of Michoacan.