On May 17th, we’ll be leaving for a trip to Mexico.  We will fly into Guadalajara and plan to start our trip by spending a few days in Mexico’s second largest city. 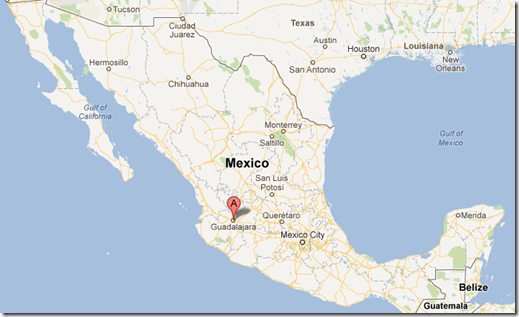 At this time we don’t have a fixed itinerary beyond Guadalajara, however, there are a few places we have an interest in visiting:  Leon, Guanajuato, San Miguel de Allende, Morelia, Oaxaca, Xalapa and Veracruz.  Depending upon our timing and interest level we may wander further east into the Yucatan.  Our plan is to return to LA near the end of July.  Valerie’s son Jason is getting married on August 18th, plus we’d like to be able to see some of the Summer Olympics which begins on July 27th.

I know some of you may be concerned about the level of drug related violence that has plagued some areas of Mexico in the past 2 or 3 years.  While we are mindful of this risk and do not dismiss it we feel that the risk is acceptable.  We consider the following in arriving at this decision:

– There is violence and crime virtually everywhere on the planet, some areas more so than others.

– MOST of the drug related violence has been directed at rival organizations, journalists and government officials who represent a threat to exposing the activities of the drug groups (referred to as TCO’s, Transnational Criminal Organizations by the US State Department).

– MOST of the drug related violence has been occurring in cities along the Mexican border with the US.

– We are not traveling in a large group of tourists, which one can argue would make you more of a target than when traveling alone.

– We are low profile travelers.  We stay in “budget” or mid-priced hostels/hotels, not in luxury “American” style hotels.  When out walking around, we do not wear expensive watches or jewelry or carry expensive cameras, smartphones or other potentially desirable items.  We do not wander into non-tourist areas after dark.  Also, we generally carry only the cash we expect to need for that day and do not carry credit cards.  Clearly, everyone knows that we are not “locals” (me:  super white and too tall; Valerie:  Japanese) but these factors tend to keep us from becoming obvious targets for thieves and other evil doers.

We’re looking forward to the trip and will of course add to the blog as we make our way through central Mexico.

3 thoughts on “Trip to Mexico”