We took advantage of our time in Las Vegas to visit a couple of the nearby state parks.  Red Rock Canyon is located only 15 miles west of the Las Vegas strip.  The mountains in the Red Rock area were formed by a number of geological forces including fractured faults where the earth’s crust collided over millions of years and fossilized sand dunes. Some cliffs reach up to 3,000 feet.

The park has a 13 mile scenic roadway with many areas to stop for hiking or just to get a close look at some of the geologic features.  The sandstone rocks get their color from iron oxide. Over centuries the iron oxide built up, producing the vibrant, crimson color the canyon illustrates today.

One of the more scenic parts of Red Rock Canyon is the Keystone Thrust Fault. Here, millions of years ago, two of the earth’s plates collided with such force that part of one plate was shoved up and over the other. This created a magnificent contrast between grey limestone and red sandstone.

Located about 55 miles north of Las Vegas on the east side of I15, this is the oldest state park in Nevada.  This area offers even more examples of the Mojave Desert’s geologic history dating back to the age of dinosaurs, 150 million years ago. 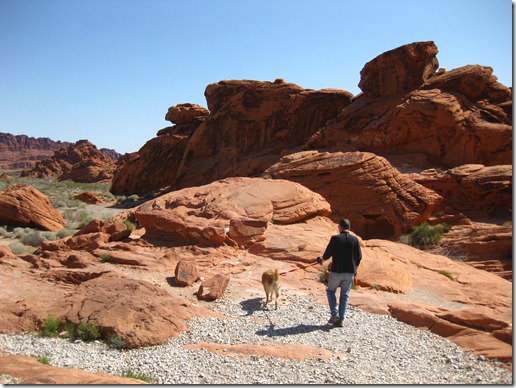 Complex uplifting and faulting of the region, followed by extensive erosion, have created the present landscape dominated by the red sandstone formations.  Other important rock formations include limestones, shales and conglomerates.

The park has roadways that allow you to drive to all of the most interesting rock formations.  There are many areas for picnicking and there are numerous hikes available.  We took Carlos with us on both of our outings.  He is a good car mate and enjoyed the opportunity to get out in the sunshine for some hiking.