Another storm came through early on Tuesday, Feb 6.  When we woke up there was probably less than one inch of new snow.  With some uncertainty about how the weather would play out on the mountain, Valerie didn’t want to ski so I went alone.  I skied for about 3 hours and the snow fell non stop; at times what I would call “pounding” snowfall.  Ultimately, the storm dropped 15” of new snow on Heavenly. 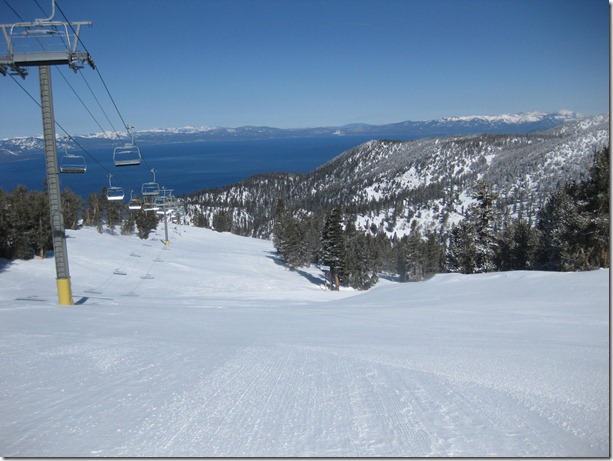 So when Wednesday morning came and the skies were clear and blue, we grabbed our skis and headed out for an early start on what promised to be a super good day.  However, once we got to the base lodge we found that almost all lifts were on wind hold.  We waited until about 9:15am when we found that they were going to start running the lifts.  We took the lift and found that it was windy but we would give it a try.  I made my way to Sky Express which is the lift that reaches the highest point the mountain.  On the ride up the wind was brutal and very cold.  I was told it was in the range of 5 to 10 below zero wind chill.  Naturally there was blowing snow which had formed deep drifts across some parts of the trails.  As you can see in the photo above, the good news was that there was almost no one else there so most times I was skiing alone with no other people in sight.

After a few runs I met up with Valerie and we decided that we would pack it in and hope for a better opportunity tomorrow.