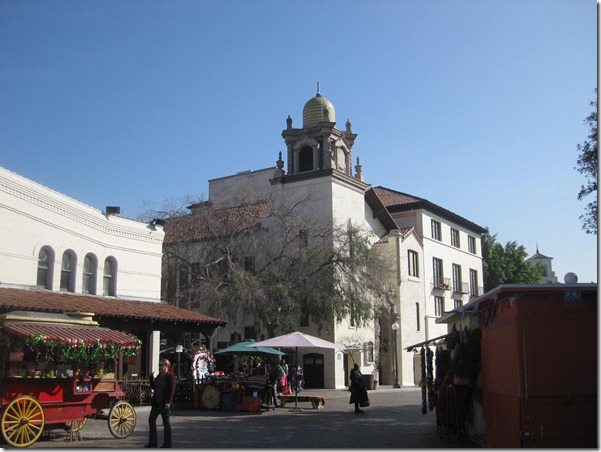 El Pueblo de Nuestra Señora la Reina de los Ángeles was the original name for the city we now know as Los Angeles.  Founded in 1781 it was the second town settled during the Spanish colonization of Alta California.  Eleven families were recruited from the Sonora y Sinaloa province of the Mexican Republic.  Here you will find Olvera Street, a popular tourist attraction.

There you can see the original firehouse as well as La Iglesia de Nuestra Senora la Reina de los Angeles, the church dedicated in 1822.  Next to the firehouse, there is a small tour office with volunteer docents who conduct free tours of El Pueblo Sunday thru Thursday at 10:00am, 11:00am and 12:00pm.  They have great stories about life on the dusty streets of early Los Angeles.  They will also show you the Avila House, the oldest existing house in Los Angeles, built around 1818.  Nearby, you can wander through the market area and check out the Mexican food choices.  We can vouch for the taquitos from Original Olvera Street Taquitos.

Across the street from El Pueblo you will find Union Station.  The railway station was opened in May 1939 and is considered the “Last of the Great Railway Stations” built in the US.  The lower portion of the interior walls is travertine marble and the upper part is covered in an early form of acoustical tile.  The floors are terra cotta tile with a central strip of marble.  Enclosed garden patios are on either side of the main waiting room.  Even if you have no need for rail transportation, it’s worth a visit to Union Station.